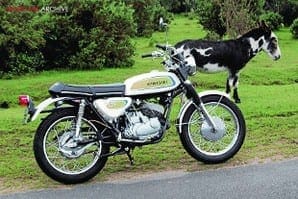 The street scrambler concept can effectively be seen as a methodology to sell a bike to a sub-set of customers who fancied something a little different from the conventional street machine.

Using as many overt references as possible to dirt and desert sled successes, the British factories positively poured bikes, with varying degrees of off-road capability, into the USA towards the end of their tenure.

The upstart Japanese factories quickly saw that this was profitable market and very early on applied an off-road makeover to machines that were obviously very much street orientated.

The fact that few if any of the oriental machines had enjoyed any competition success in getting down-and-dirty was of little importance. The bike buying public loved the style and for around a decade the high-piped street bike was a common sight on US streets.

A cynical review of the Japanese factories’ production techniques would suggest that despite looking sufficiently different from their road-going cousins the street scramblers required little real or significant capital investment to effect the transformation. A set of high rise pipes was obviously de rigueur along with a different paint scheme. Throw in some high braced bars, longer cables and some new graphics and the job was almost complete. Most if not all the running gear and power units remained unaltered so the overall cost to produce an allegedly new model was minimal. 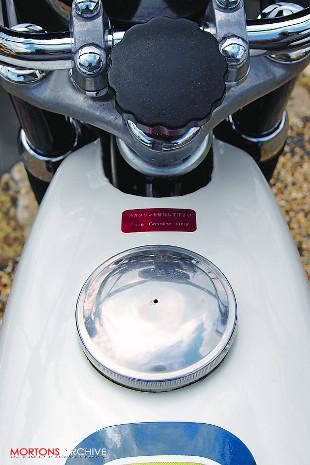 What Kawasaki did to create this month’s test bike was to modify one of their most sensational contemporary road bikes. Whether anyone was ever brave enough to ride one off road with any degree of competitiveness is open to some debate but if they did then they probably needed their bumps felt.

In line with many Japanese machines of the period the focal point was, without question, the engine. The 350cc disc valve induction, air-cooled, two-stroke twin was quoted as being in possession of more than 40 horses and even allowing for that measurement being taken at the crank and the well documented manipulation of the actual figures by the ad teams this was one serious piece of kit. Contemporary road tests describe the power coming in at 3500rpm, progressing strongly then rising like a sky rocket all the way to 8000 revs.

Technical investment also went into the sparks department, which has to be one of the earliest production examples of a solid state ignition system on a motorcycle. The spark plugs were certainly an unusual application of the technology at the time and were a surface discharge type claimed to be virtually impossible to foul. The A7’s system was also used on the first of the 500cc triple and while it made a good job of hurling kilovolts of HT down the leads and across the spark plugs the interference emitted managed to temporarily screw up nearby TVs or radios to such a degree that Kawasaki had to back track and fit a conventional system to subsequent triples. If the plugs were effectively immune to fouling it may have something to do with the 350’s parsimonious approach to oil consumption which was often equated to being similar to four-stroke twins.

Riding someone else’s bike should never be dull or mundane; if it is then you’ve become either a hardened cynic or you’ve lost touch with the essential vibe that is classic motorcycling.

'With the ignition switched on, the bike makes a strange whining noise from its thyristor ignition system, apparently if you don’t get this characteristic sound the 1960s electronics are probably toasted'

Chris Brealey’s Kawasaki A7 SS has absolutely no intention of allowing me to take it for granted and right from the off it makes its intentions crystal clear. With the ignition switched on, the bike makes a strange whining noise from its thyristor ignition system, apparently if you don’t get this characteristic sound the 1960s electronics are probably toasted.

I stand by the left hand side of the bike as Chris fires up the motor and almost jump as the two high level exhausts bark at me and spit out partially combusted oil. As the owner blips the throttle I’m beginning to wish I’d remembered to bring some ear plugs. Hell's teeth, this bike is loud and in your face. It’s like foregoing an anaesthetic and opting for root canal work on your teeth via your ears. 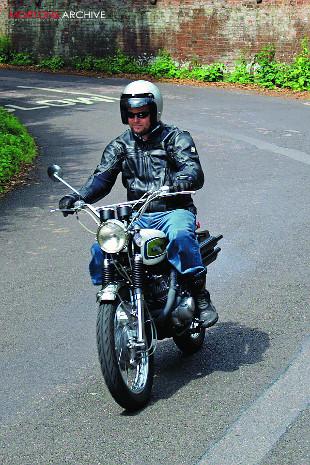 Sitting on the bike you realise that form has taken sway over function. The pipes are just inside my left leg and the kick-starter is making its presence felt on my right calf. The raised bars are reasonably rider friendly and the clutch seems light enough. With a typical early Kawasaki gearbox that features neutral at the bottom of the box it’s up for first and off onto the sweeping roads of the New Forest.

By the time I’m out of the 30 limit the motor is pulling like a steam train. The exhausts emit a demonic cackle as I begin to play a tune balancing with the throttle and gears; the power just keeps on coming and coming. Disc valve two-stroke twins are about as good as it gets.

If the chassis has any handling foibles I don’t get to find them. No doubt a younger rider who’s grown up with more modern machinery would find fault but for an apprentice grey-beard, the Kawasaki doesn’t hold any noticeable terrors. As drum brakes go, the stoppers on the bike are pretty damn effective. Obviously you’d reasonably expect fade after prolonged use but both ends prove to be better than I’d expected. The front TLS unit has lots of power and works very predictably; the rear unit is also very useful and offers a lot more feedback than you might reasonably expect from a cable operated rear brake with all of the attendant linkages.

The high bars allow a fair amount of leverage and although there’s no difficulty in piloting the bike it’s very easy to overtly manhandle the Kawasaki through corners if you want a bit more fun. In fact it soon becomes almost second nature to want to virtually throw the A7SS through a series of bends just for the dramatic effect. A little extra counter steering tips the bike in beautifully and allows the rider to get on the throttle just a little bit quicker.

There’s undeniably an aura of hairy chested machismo about the bike and although I wouldn’t normally aspire to such mindsets I can immediately see the potential posing power in a typical late 60s provincial American town. This potential facade is underlined by the fact that the bike comes with two steering dampers but in deference to Chris’s bike I never took the liberty of adjusting them, in case the 350 decided it might want to land me on my ear for a laugh. 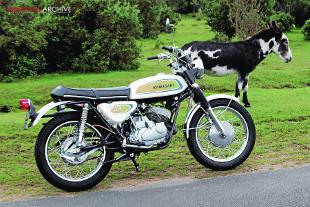 I agree with owner Chris, the bike goes like stink and is capable of bringing a smile to any rider's face. Factor in that the razor sharp pick up that makes the best of the gearing fitted, the exhaust note, the good brakes and that gutsy engine and you have the makings of a two-wheeled hooligan. The motor, those high level pipes, the whole experience, all so simply awesome in a totally socially unacceptable manner; it’s almost a two-wheeled thug. Is there a better alternative in the street scrambler world? If so I’d love to try it.

On the test bike
Unlike the majority of Chris Brealey’s bikes, the A7SS doesn’t have too much of a story behind it. Originally it belonged to a Chinese-American who lived next to San Francisco airport and he’d abandoned the bike due to a transmission issue.

Well-known specialist Governors Bridge acquired the bike and took it to Netley Marsh autojumble and Chris decided he just had to have it. Apart from the usual cosmetic issues the only show stopper was a gear selector fork that had broken in the gearbox, fortunately without causing any further damage. 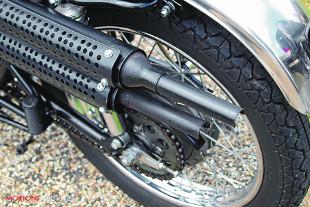 While this might not have been too much of an issue on some bikes, with the A7SS it had huge potential to delay progress. The selector is the same part as on the company’s seminal H1 500 triple and therefore very rare.

Given that such parts often sell for £60 on eBay, even second-hand, Chris thought he might well have a protracted wait before he got to enjoy riding the street scrambler. Kawasaki A1/A7 parts are generally very hard to find parts and people who have such stuff tend to sit on the components and are very guarded about who they sell to for fear of some disreputable rogue capitalising on rare parts and selling them on for profit.

When a local Kawasaki expert heard of Chris’s plight and realised he was a true enthusiast, and not a speculator, he handed over a new gear selector for just £2. A very grateful Mr Brealey installed the part and the rest, as they say, is self evident. One 350 hooligan motorcycle, with all the social responsibility of Slade tanked up on Stella, back on the road.