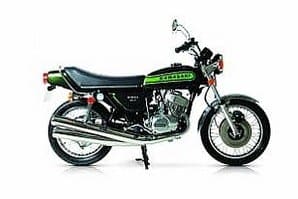 The 1969 Kawasaki 500H1 Mach III triple was the first motorcycle of its kind. It was cheap to manufacture, stylish and brash, and delivered performance unfettered by any concerns of economy or tractability. Capable of a 12.3 second standing quarter right out of the crate it had brakes that were, at best, adequate; and a frame which seemed to be hinged in the middle.

Unsurprisingly the US market loved it – and equally unsurprisingly wanted more. The answer was the Mach IV H2 750 – a bigger brother for the H1 with a full 748cc engine. Launched in December 1971 the bike was capable of lifting its front wheel through the gears and several insurance companies instantly refused to cover it. Power was up to 76bhp from the H1s 56bhp, but the H2 was actually more torquey than the 500 and less peaky to ride.

Gold colour options
Though listed in blue or gold colour options, only blue models were sold in the UK. For the 1973 season the H2A had a slight power cut to 74bhp, but customers now had a choice of candytone gold or candytone purple colour schemes. The original bike’s painted front mudguard was replaced with a chrome item, and a seat and filler cap lock appeared for the first time. 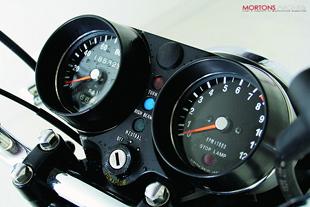 Only 30 H2As were sold in the UK before the bike received a major facelift and became the 1974 model H2B. Another 2bhp had been shaved off the power output, and the cosmetic makeover extended to a revision of the scavenging and emissions to help meet environmental legislation in the US. Brown or green options were now offered, steering geometry had been revised and the bike came with a steering damper fitted as standard.

The H2B was capable of a top speed of 117mph, with fuel consumption varying between 20 and 50mpg. The final H2C model followed for 1974 with minor cosmetic updates, and colour options of candytone super red and candytone purple. A world total of 47,611 H2s were manufactured over the four-year period, 563 of which were imported to the UK. Of those, 120 were H2Bs.

Revised geometry
When the US magazine Motorcyclist tested a H2B in December 1974 they found the revised geometry and longer swingarm had gone some way to taming the unpredictable handling of the H2 and H2A. On the earlier models, "the trick was to explode it from corner to corner, shutting down quickly for each turn before getting back up on the holes again." The longer wheelbase and resulting front end weight transfer had helped, but handling was still odd. "The banking process is not progressive; the chassis rolls over normally until it is about half bank, then tends to suddenly fall inward."

The bike was, however, found to be quite stable in a straight line at speeds up to 110mph, at which point the tester had presumably run out of bottle. The motor pulled strongly from 2000rpm, with things "getting interesting" from 4000. Fuel consumption bottomed out at 19.1 miles per (US) gallon when ridden hard, with a best of 37.39mpg.

Development background
Kawasaki's range of two-stroke triples established the company as a producer of high performance motorcycles and set the scene for the place they now occupy in the world market. 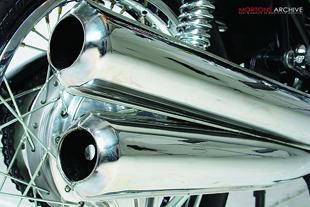 Having previously manufactured a range of plodding vertical twins modelled after the BSA A10, the first Kawasaki two-strokes to make their presence felt on our shores were the 250cc A1 Samurai and 350cc A7 Avenger, a fine pair of disc valve two-stroke twins, having much in common with similar offerings from Yamaha, Suzuki and Bridgestone.

But it was the H1 Mach III, a 500cc two-stroke triple launched in 1969 that set the world alight. Blisteringly fast, with a wild, peaky engine and dangerously ill-handling frame, the H1 was the most adrenaline filled two-wheeled experience it was possible to buy.

It was such a success that Kawasaki quickly followed up with similar triples of 250 and 350cc displacement – but the ultimate triple had to be the 750cc H2 Mach IV, launched on an unsuspecting world in 1972. The bike had minor revisions for the 1973 season when it became the H2A, followed by the H2B of 1974 and the H2C for 1975. Had it survived for the 1976 season it would have undoubtedly been re-designated as a KH750 to match the revisions to Kawasaki’s new model codes; but the pressures of environmental regulations and the ascendancy of the Z1 series together conspired to drive it out of production.

Bike owner
Eric Buckley has a small collection of restored classics, including the Honda CB175 we tested back in our July 2005 issue. He restored this H2B to showroom condition over a three year period. "It was the bike I always wanted to own, but could never afford at the time," says Eric. "It's been a very rewarding project to finally complete, and it's great fun to ride."