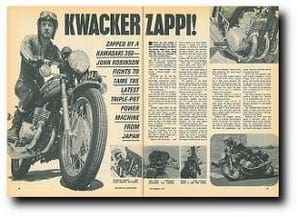 How do you judge a machine? By the way it goes or how it looks, or what? No matter what it is you're looking for, at some stage you will have to compare it with other similar bikes.

In the case of the new Kawa­saki S2 the only comparison which immediately springs to mind is another Kawasaki—the H1—because no other machines have this three-cylinder, two-stroke, medium-weight con­figuration.

Although the S2 has lost 150 cc it still makes a very favourable comparison. Every­one I have spoken to who has ridden both has summed it up by saying that the 350 is much more manageable.

The power and the perform­ance are still there, in a slightly subdued form, but any reduction is more than made up for by the ease in which you can get power out of the engine and on to the road.

Anyway, how often do you need to use more than 45 bhp on the road? Given a cross-country route, as opposed to a belt down the motorway, I am convinced that the 350 would prove as fast, if not faster, than many superbikes of more than twice its capacity. 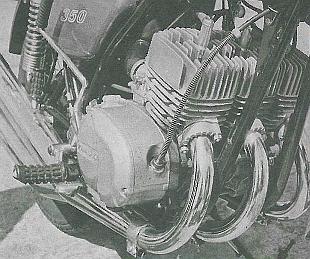 By now I've probably given you the impression that this machine is fast. Well, it is: so fast that it hardly bears com­parison with other 350s.

Now for the bad news . .. and this is where I run into trouble, because I believe that there's no point in writing a road test without criticising the machine. No bike's perfect, and any con­scientious road test ought to say why . . . the only trouble is that it was a hell of a job to find any­thing wrong with the Kwakkers.

Only after I worked myself into a really mean mood did I uncover the following flaws:

First the fuel consumption is inevitably high, getting worse if you use all the revs, and with this in mind the fuel tank could have been made larger.

The settings of the spark plugs, carburettors and oil pump are much too critical for a road machine. In a way this fits in with the fuel consumption and the way the thing is ridden.

When we got the S2 it was still being run-in and had the carburettor needles one-notch too rich, along with soft spark plugs. After running-in, these settings produced a staggering 28 mpg and left oil all over the rear of the machine. We had to fit harder plugs for fear of burn­ing a piston, and then we dis­covered that although the motor was happy while buzzing, it wouldn't run for long below 4000 without fouling a plug.

A few moments work on the carbs brought the consumption back to an acceptable level and cleaned the exhaust as well as giving the motor a noticeably quicker pick-up. Oddly enough the engine seemed quite easy to work on, although I should think that balancing the carbs might be a bit of a Task.

The only other problem was a very stiff clutch cable, caused by a tight bend between the lever and the steering head. We partially cured this by re-routing the cable, but really the lever needs to be set at a different angle to the handlebar.

And that, believe it or not is all we could find wrong. Every­thing else is just fine.

Kawasaki make aircraft, so they know all about precision engineering, and the S2 fairly glows with it. It is nicely styled, has a very attractive paint job and a superb finish with lots of attention to detail.

Despite the elegant styling there is no waste, everything is strictly functional. For instance, the seat is comfortable, adds to the lines of the machine, makes life easier for passengers, has ample room for tools and carries the huge rear lamp.

Points like the gearshift also leave a good impression; it has a linkage which can be reversed simply and quickly giving either an up-for-up or an up-for-down movement, according to prefer­ence. The pedal can be adjusted with no fiddling or fuss in about six seconds flat.

The riding position has been carefully thought out, proving to be comfortable one- or two-up and giving a good leaning-forward attitude for high-speed road work.

The switches and controls fall readily to hand (and foot) and all work cleanly and crisply, although the horn is a bit feeble.

Starting up from cold was never a first-time affair. The technique was to pump the kick-start on half-throttle and full choke and somewhere between the fourth and eighth swing the motor would burble into life. There were two points we liked here, first, the twistgrip, which is the quick-action variety and gives full throttle in a quarter of a turn. Second, the choke, a spring-loaded lever which fits neatly under the right thumb. This is a good point because if you use too much choke the engine will foul a spark plug, so the second it begins to fluff you can ease your thumb off the lever while still being in full control of the throttle.

Warm starting was simplicity itself; there is little resistance to the kickstart and it can be pushed down six or eight inches with the hand, at which point the engine literally screams into life.

When riding the S2, it is mild and docile up to 6000 rpm, after that point the power steps up sharply and soars on past the 8000 peak into the red at 9000. It isn't that the machine has two characters, rather that the engine has two power ranges. 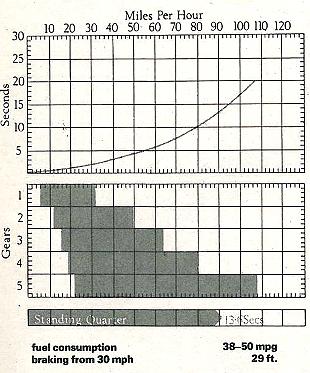 The first giving flexible power from 2000 up to 6, is quiet, easy to manage, ideal for around town or for getting the best fuel consumption. Take it above the magic 6 and racer-like power comes flooding in giving incred­ible acceleration and the possi­bility of either spinning or lifting a wheel without even trying.

The engine stays smooth all the way up to bursting point and makes some of the nicest noises I've heard in a long time. The gearshift is good and fast, with ratios ideally spaced for keeping the motor boiling in road con­ditions.

All of the machine's character­istics are geared to making it a fast performer on the open road. It will get up to well past the legal maximum very quickly and holds its speed easily. The brakes and handling are well up to this standard and it takes no effort at all to put the Kawasaki just where you want it.

On the Snetterton circuit it didn't seem so fast, but still put in some pretty respectable times for a fully-equipped roadster.

The only concessions we made to the high-speed circuit were to pump the tyres up to 34 psi rear and 28 psi front and to tighten the steering damper half a turn. The rear dampers were left in the "softest" posi­tion, as they were for all of the test except when a passenger was carried.

For circuit use the S2 was undergeared—with a slight tail­wind it was reaching 9300 rpm in top about one-third of the way along the Norwich straight, and only needed fourth and fifth gears, except at the hairpin where third was used to keep the revs up.

After three or four laps using heavy braking, the brakes started to get hot. They didn't fade but they did need noticeably higher pressure to produce the goods.

Handling was still superb with barely a twitch of the steering when hitting bumps while cranked over. The ground clearance, which is more than adequate for road use, became the limiting factor on the track. The first points to touch were the footrests, which fold back and up, and occasionally the lower silencer on the right-hand side would graze the floor.

During this flat-out riding session oil began to seep from the rev-counter drive and the rear chain stretched consider­ably. This slackness caused quite a lot of vibration around 7000 rpm in top which in turn caused the front nearside indicator to come adrift: a good example of how quickly vibration goes to work!

On a few brief night runs the lighting turned out as well as on other high-performance mach­ines, but here I think Kawasaki are fighting a losing battle. It would need a battery of search­lights to meet the S2's full performance!

In all, although it is only a 350, the Kawasaki S2 is one of the most rapid road machines we have tested.