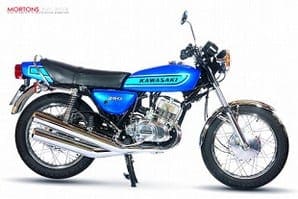 The 250 S1 hit the ground running in early 1972, hot on the heels of the larger 350 S2. The triple took over from the technologically more advanced and sophisticated 250 Samurai which had featured disc valves and, by default, a piggy-back ignition set up behind the pots. Intent on displaying the family triple lineage the S1’s styling was dramatically different from the Samurai. With those sweeping triple-line graphics and tailpiece the machine made a bold styling statement that others manufacturers would only have the courage to emulate years later.

Sharing a significant number of parts with the larger S2, the 250 was distinguished by its six-finned cylinders rather than the seven found on the bigger machine. This donated architecture effectively hampered the smaller triple to a degree as, to all intents and purposes, the bike was largely a 250 pulling around a 350 chassis. However, at the time this was common practice as demonstrated by Honda’s CB250 and 350 K offerings and Yamaha’s YDS7/YR5 or their later RD250/350 machines. 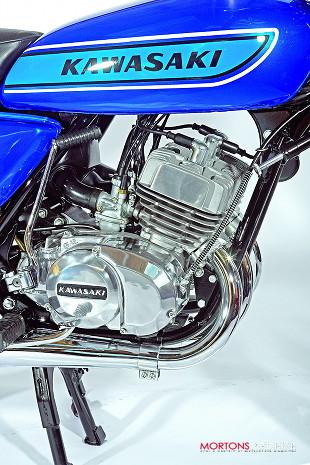 For 1973 the S1A replaced the S1; largely borrowing the upgrades and changes of the 350 S2A except for the front brake which remained a twin leading shoe drum. The most obvious differences were the change of colour schemes and graphics. Ditto 1974, the S1B took its lead from the bigger bore 400cc S3. Although still every inch a Kawasaki some feel the aesthetic changes somehow muted or sanitised the smallest triple’s visual appeal.

The following year saw a similar scenario for the S1C before the arrival of the KH250 that finally came with a long needed front disc brake.

Unfortunately, with an eye to burgeoning legislation and emissions, the entire triple range (and every other performance stroker of that generation for that matter) began to lose its marketing appeal, gradually turning from leading light to social pariah. All of this muted its unique appeal; initially in the USA and gradually by default in Europe. For many the first model is the definitive 250 triple to own, yet anyone who is fortunate enough to have the opportunity to experience any of the S1 range is unlikely to be disappointed.

Part of the unique appeal of Kawasaki triple ownership has always been the auditory delights of the bike. The exhaust note is like nothing else; add in the typically poorly silenced induction roar and 70s aural heaven is never too far away. The middle pot of a triple will always run hotter than its two partners in crime and internal clearances were allegedly always massaged to take this into account. There are all manner of rumours, urban myths and tales about the middle pot of a triple and airflow; whatever the truths or otherwise it all adds to the legend and aura.

The handling of the S1 is pretty much on a par with its contemporaries such as Suzuki’s T250 or Yamaha’s DS7 but not quite as crisp as the later RDs. Even now the motor of a properly set up S1 cannot fail to impress with its ultra smooth running; a three cylinder two-stroke has all the correct and self cancelling rocking couples and harmonics. One indisputable fact is that the TLS front brake suffers from fade after a few heavy applications. The brake struggles to get the stopping distance from 30mph below 36 feet. 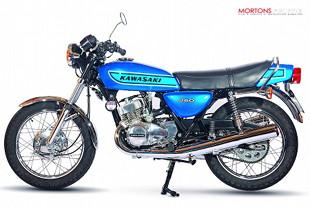 Whatever the nit-picking differences there are intangibles that come free with every 250 triple. No other 250 has three pots, an asymmetric exhaust tail plan or that unique sound. The way the early tank graphics are continued from the tank through to the tailpiece were pretty much a Big K invention and this early graphics package effectively cemented a standard that has been carried on in general terms to the present day.

A definitely unwelcome, detractory, fact of life with S1 ownership has to be the fuel consumption; they are cursed with a dipsomaniacal thirst. Spirited riding can see petrol disappearing through the motor and out into the environment at a frightening rate; figures as low as 20mpg have been reliably recorded. The bike is a product of its time though; designed and constructed when petrol was less that 35p per gallon and frugality was never in the game plan. By the time this S1C was launched various political, environmental and energy crises meant fuel was no longer such an inconsequential consideration as it might have been a few years earlier in a teenager’s criteria. However, sales figures suggest many decided the baby triple’s unique high street image still outweighed the extra costs and penalties. No doubt the banshee wail of the quarter litre triple and a trefoil plume of partially combusted hydrocarbons, escaping wraith-like from the oil soaked baffles, made up for any fiscal frailties.

What to buy
Without doubt, anyone who runs and rides, or restores, the first S1 model deserves a medal. These iconic machines must be some of the most difficult triples to restore and keep close to original. The correct parts are hard to obtain and the finish on the S1 engine cases is pretty much unique.

The later S1C, as featured here, is a slightly more practical option from a restoration or running and riding perspective. However, to be brutally frank and objective, the subsequent KH250 is easier to obtain fettle and maintain. All of which adds to the cachet of S1 ownership.

Ultimately Kawasaki S series ownership is more about buying into a marketing and image concept rather than owning the definitive 250cc performance machine.

The ultimate two-stroke triple performance accolade was there to be had but not at learner level. Who cares? For a 70s teenager form normally took precedence over function and the visual statement made by the S1 remains, without doubt, light years ahead any of its contemporaries. 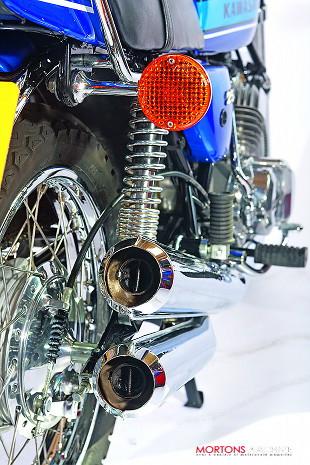 What to look out for
The middle pot can seize and the big ends can rumble, which is bad news.  Some bikes suffered with jammed cranks. The lead weights pressed into the flywheels sometimes fretted their way loose locking the motor solid.

Second gear can fail due to bent selector forks (due to insensitive teenage feet stamping on the gear lever). The pins on the gear linkages can wear allowing the lever to touch the rider’s foot and this pressure can place further strain on the system.

As with all bikes this age be on the lookout for pitted fork legs and leaking seals. Rear shocks were never good even when new so quality aftermarket units are not a bad thing necessarily. Tin ware, air boxes, rear tail units etc can be difficult to source so buy as complete a bike as possible.

The original TLS drum was never good from new, so don’t expect wonders. Modern friction materials matched to perfectly round drums will make the best of what’s available along with careful setting up of the front unit.

Rings, pistons and small ends will have experienced a frenetic life so make sure the engine’s not on maximum oversize; re-sleeving will cost around £100 per pot. Outer crank seals can leak so look for an oil leak on the LHS near the points or gearbox oil being dragged in the engine from the RHS.

The electrical department was standard 1970s Japanese and typical of the period; good when new but undoubtedly tired now. Corrosion and oxidation allied to meddlesome owners are likely to be the biggest issues.