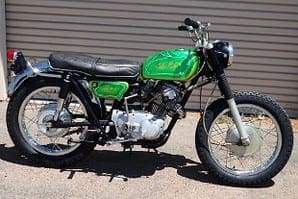 Dan Ince knows a famous bike when he sees one. The guy has committed a rash of celebrity VINs to memory, and spends plenty of time looking over local motorcycle listings for vintage Husqvarna machines with famous pasts.

While he has a soft spot for bikes owned by Steve McQueen, he recently came across something a little different. A local Craigslist ad (a US founded local classifieds and forums site) served up this 1968 Honda 305 Scrambler with an interesting pedigree.

Registration papers showed the bike once found itself in the care of Kenneth R Howard, better known as the master-pin-striper and designer Von Dutch.

That explains the wild paint and would typically be enough to give any machine a little notoriety, but Ince says he found something else in his research.

“The registration and lease and liability card that I have for it dated March of 1968 lists a James Douglas Morrison living on Sunset Boulevard.

The scrambler is up for sale independently, and Ince says he has no idea what it could be worth. Outside estimates have put the value between $50,000 and $100,000. Not bad for an old Craigslist find.

Go to to www.HuskyRestoration.com for a closer look at the bike.