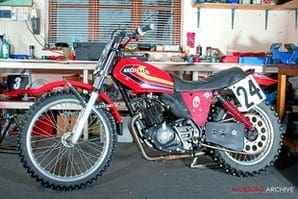 The numbers are astonishing. 1325 wins from 1560 starts. No single machine we know of comes close to the stats of this 1979 XL250. It belongs to Neil Tuxworth, the man who runs the HM Plant Honda Racing team, which used to be Castrol Honda and has a few race wins, and British and World championships to its name too.

But those trophies sit in the team’s HQ. That’s Monday-to-Friday nine-till-five (more like nine-till-nine if truth be told). This bike is what Neil does to unwind at the weekend. And unwinding in the Tuxworth household involves hurling yourself around a bleak, windy beach every fortnight in the close company of half a dozen other focused madmen. 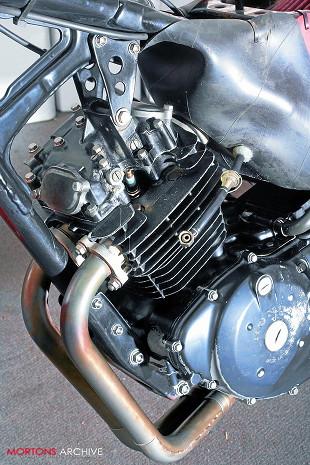 Beach racing is fast, difficult, stylish and beautiful to watch. Like the best bits of flat track and speedway on the most unlikely machines, with ice cream. There is no prize money, no podium, no corporate thanking of sponsors. The crowd (and there always is one, even in deepest winter) watches for free. It costs a tenner to join the club, pay your £25 on the day and get two practices and five races. Grass roots doesn’t begin to describe it. But that doesn’t mean riders don’t take it seriously.

Neil’s garage looks like yours or mine at first glance. Slightly chaotic, a long way from the perfect sheds we all dream of owning. No power tools, no lathe, just a motley collection of tools, a few boxes of spare parts, the obligatory racing posters and some part-used bottles of fluids. In the middle is the XL250 on a ramshackle stand with Neil’s steel sand shoe hanging over the footrest. But as we talk and Neil moves the bike around for our photographer, I start to pick up the signs. Everything here is meticulously organised. A place for everything and everything in its place. That steel shoe gets replaced on the exact same spot when we’re done. As does the towel covering the tank, as do the newspapers under the bike. This is the kind of attention to detail it takes to win three World Superbike championships. This is the kind of attention to detail that turns a £100 XL250 into the world’s most successful race bike. But it wasn’t always like this.

“My brother bought the bike new in 1979 and ran it on the road for a year.” Neil talks as he strips the XL in a few well-practiced seconds. “We used to muck about on it doing a bit of off-road stuff and I asked him if I could borrow it to go beach racing. By that time I’d been racing on sand for 10 years on an old BSA C15, but I needed something quicker. My brother agreed and I raced the bike over the winter, and truth be told made a bit of a mess of it. Back then we were still learning how to protect a bike against salt water and sand. It was a bit of a state so I offered to buy it off him. 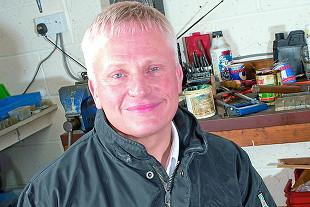 “The bike was raced standard for most of the first five years. Standard handlebars, standard 23in front wheel with trail tyre, lights, mirrors, indicators, number plate… the lot. Back then I was still road racing so the beach stuff was just a way of keeping fit and staying sharp over winter. We had to be careful because the ACU didn’t approve of beach racing so most of us raced under an alias. I was Charles Windsor for eight years.

“The serious modifications began after five years or so. A 21in front wheel and proper motocross tyres. I pulled the forks up through the yokes to lower the bike and fitted some Hagon shocks (although he kept the original XL springs which are still there today). The bike needs to be low and fairly stiff. The fork internals are standard but I use 15w oil instead of the standard 5w.

“It was almost 15 years before I did any real engine work. A standard XL makes around 19bhp and that was enough for a while – it’s only a bit of fun after all. But I wanted more power. A Wiseco piston and some head work raised the compression and improved gas flow. And I had the original cam reprofiled by Joy cams for more lift and duration. At the same time I also fitted a smoothbore Amal Concentric carb and a homebuilt exhaust with the assistance of Don Briggs. 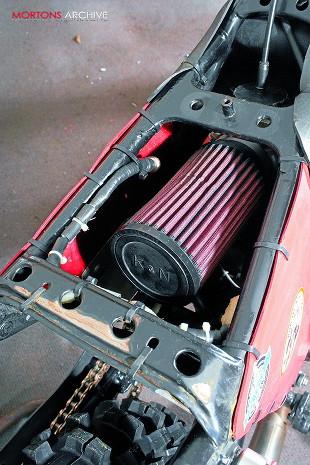 “A few years back when our Honda race team started using Akrapovic exhausts they offered to build a system for my bike. I said yes because the titanium pipe wouldn’t rust and my home-made effort was getting a bit threadbare. We were at the factory with four Akrapovic technicians on the race bikes and one working on mine. Their first pipe was beautiful but made two bhp less than mine and Briggsy’s. By the end of the week there were four people working on mine and one on the race bikes but they got there – this one makes one bhp more.

“It’s taken most of the last 15 years to get the carburation perfect but right now, it runs beautifully and makes around 30bhp – more than 50% up on standard. And in all that time it's only broken down twice, both times when the standard con rod broke. These days I run a stronger Arrow-built item and it's been fine ever since.”

And the thing is, that apart from the exhaust and the speedway footrest on the right hand side, you could walk past Neil’s bike and think it was standard. “The tank, seat, rear wheel and forks are all off the original bike. I did cut down the seat to get my weight lower down and I had to replace the frame a while back because, even though I kept painting it, the original was rusting away. These days I get it re-stoved every three years.”

Not surprisingly, when I ask Neil what the secret of a successful beach racer is, the answer is all about keeping the sand and water at bay. “All the electrics are rubber coated, covered in boat grease and hidden away behind the engine. All the connectors are boat connectors – I built the loom a few years back. It’s much simpler than standard and these days I run a special Interspar speedway ignition which is battery powered and gives a much stronger spark at low revs.

'Power delivery is everything. Outright power is less important. I only run three gears – second, third and fourth and most of the race is done in third. Top speed on the track is about 80mph, corner speed is around 60mph.'

“Power delivery is everything. Outright power is less important. I only run three gears – second, third and fourth and most of the race is done in third. Top speed on the track is about 80mph, corner speed is around 60mph.

“As for maintenance, it gets an oil change every three meetings which is equivalent to about 30 miles of running. The XL engine (same as the CB250RS, except the CB is black) only holds a litre of oil – I use about four litres a season. It uses about three litres of fuel a meeting, so I always put a gallon in just to be sure. The piston and valves get changed every three seasons as do the chain and sprockets. The spark plug gets changed every year.

“It’s cheap racing. I reckon I’ve spent around £2700 on it in 30 years. That’s £90 a season. Which isn’t bad  for a bike that’s won 17 championships including the last 10 in a row.” Neil smiles. A man in his position could have a bike dripping in bling, or probably even a brand new Honda motocrosser every year if he wanted to. But this isn’t work – it’s a bit of fun at the weekend and as every one of us knows the best bike in the world is the one in your garage – the one that you actually own and love. Likewise Neil’s riding kit is a pair of Colin Edwards’ hand-me-down boots, the old Arai helmet that he used to road race in and a 1980s ‘Hondastyle’ oversuit. 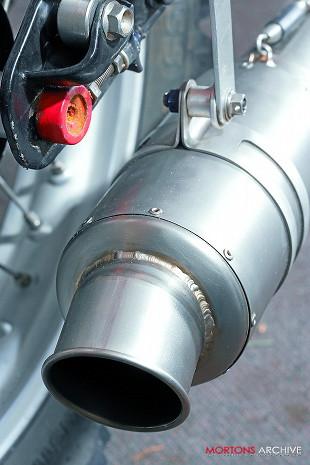 And we shouldn’t forget that the main reason this bike has won so many races is because the bloke at the controls knows what he’s doing when he gets out there on the sand. Neil tells me that the secret is to learn to keep the power on when the bike is sliding and turning even when the surface is rutted and bumpy. All that time setting up the fuelling has paid dividends too. I’ve been a regular at Mablethorpe in North Lincolnshire for the last few years and have admired Neil's aggressive, but smooth style for most of that time. It’s the last regular beach racing left in the UK and celebrated its 40th season this year. It was also Neil’s last season. “I’ll be 60 in a few years and some of those old racing injuries are starting to play up. I’m the only surviving member from the original season and 40 years seems like a good time to finish.”

So what about the bike then Neil. Will Honda be giving it pride of place at their Motegi museum?

“Not for a while,” he smiles. A mate of mine, Les Bellamy, will race it next year and I’ll help look after it for him. I did think about keeping it – I’ve got a few of my old road race bikes – but I know if it was in the garage I’d be tempted to get it out for a run at some point.”

Do I believe him? Yes, to a point. But there’s at least one bloke out on the sand who’s in his 70s and still racing a 350LC-powered grass-track bike and I somehow think that Mr Tuxworth might be tempted out of retirement for a few races sometime in the future. And there’s only one bike he could race. This one.