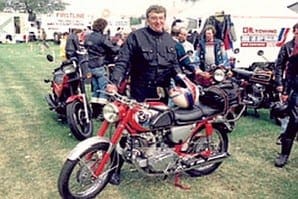 Andy Young, chairman of the club, said: “He will be greatly missed by many in the biking community as he has for many years been the font of knowledge on Honda’s and proof of age certification.”

Dave originally worked for Honda and rode Hondas most of his life, owning several rare classics. He joined the club in its early days and contributed to its Golden Wing magazine and organised classic bike runs in the New Forest.

He was also a contributor to Classic Motorcycle Mechanics and supplied some of his machines for features.

He leaves a brother Allan, son Trevor and daughter Jennie among other family members.

The Honda Owners Club GB will hold a memorial ride in August to honour Dave. Full details will be announced on the club website (www.hoc.org.uk), or contact Andy Young on 07982 419285.