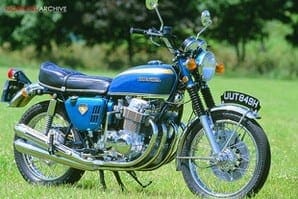 UJM; it’s become a term of derision aimed at inline-four-cylinder Japanese motorcycles that supposedly are all the same. Which is, of course, piffle. Go back to 1967 or 1bCB (before CB750) as we like to call it and you’ll remember that a sporting motorcycle was lucky to have two cylinders that worked for more than a month at a time.

Honda’s CB750 hit the markets in 1969 and transformed motorcycling forever. To the bike buying public the machine was simply light years away from the real world. Brits and Americans were thrashing the pants off 650 parallel twins with drum brakes, push rods and four-speed boxes, yet the Honda was 100cc bigger with five gears and a chain driven overhead cam. To rub salt into the wound, the Honda had a disc brake and electric start; technology for the masses and priced to sell. Things would never be the same again.

But within five years the CB750 was almost passé. Overtaken by Kawasaki’s Z1 and overshadowed by Suzuki’s GT and Kawasaki’s H2 triples.

Unfortunately for Honda, the CB was so well built that while the H2s and GT750s were thrashed and crashed to oblivion, only to resurface 30 years later as restoration projects with a reputation that made them all the more desirable, the CB750 lasted long enough to become a cheap hack for those of us wanting cheap bikes in the early 80s. So the CB’s star dwindled and many of us forgot just how impressive it had once been – it’s time to re-assess.

Our Spotter’s Guide covers the CB from 1969 through the K models to the F series. 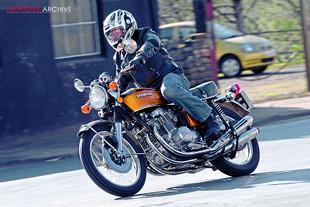 The Ks – 1971-78, CB750K1-K8
CB750K1 (1971)
Minor revisions to engine breather, cylinder head, carb mountings (they run cam and bar linkages). The airbox is ribbed black plastic and the camchain tensioner and fittings receive mods in the light of dealer feedback along with clutch springs and engine mounts. The instruments get traditional Honda green faces instead of black, the lenses change from glass to plastic (along with the redline dropping from 8500 to 8000rpm) and the instrument bodies change from plastic to metal. Long plastic chain guard.

CB750 K3/4/5 (1973-1975 not sold in UK
Although not sold in the UK, some of the mods appeared on our bikes. Upgrades to cylinder heads, valve stem oil seals refitted as per 1969 bikes. Front forks upgraded along with brake caliper mounting system. Cut out switch on clutch interlinked with gearbox and starter motor. Larger indicators fitted to K5 model plus new design of fuel tap. Rubber 'flip-up' pad fitted to sidestand. Daylight running lights fitted. Fuel tap moves from right (K4) to left-hand side (K5).

The 1976 K6 was a parts bin special with older, smaller indicators with parts from the F-series bikes. A mixture of old and new incorporating K3-5 mods and F1 swingarm. Engine breather deleted. UK model received a USA K2 grab rail. The final K7 and K8 had a model code of 405 replacing 341 and used many F-model upgrades (cases, head and pistons). Gaiters omitted from forks and rear shocks lost the shrouds. Updated four-into-four exhaust. 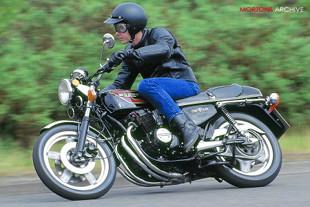