The Harley spat out one final sulky puff of smoke as I switched off the ignition and drew a deep breath. "You know, Dennis," I said reflectively. "That really is one truly great, great bloody awful motorcycle!"

"A dinosaur with attitude," agreed Dennis. We grinned at each other.

Allegedly, this is the fastest old iron-engined Harley ever made. A brief history lesson. In the early 1970s Harley-Davidson fielded a bike called the XR750 in the wildly popular US sport of dirt track racing.

It utterly ruled the roost and blew away all comers – at least until a certain Kenny Roberts started racing a much-modified Yamaha XS650 and then an utterly fearsome TZ750 engine in, er, a dirt bike chassis with no brakes.

Harley fans practically begged the factory to produce a road version of the sexy XR750 but they didn’t. Plenty of people built their own out of Sportsters but Harley wouldn’t budge – in a catastrophically stupid move reminiscent of BSA’s refusal to build a road version of their racing Rocket Three.

Of course, H-D was owned by AMF in those days. When the company finally managed to buy itself back from their clutches in 1983, the first thing they did was to… produce a dirt track replica. It wasn’t a 750 but a 1000. Still based on the Sportster, it was quite the most evil-looking, minimalist, god-damned aggressive bike Harley had ever built. Quite possibly it still is.

For $6995, what you got was a Sportster with styling to die for, much-modified heads (tweaked by the legendary tuner Jerry Branch), an exhaust system that was little more than a pair of megaphones slung along the left-hand side and a pair of huge slurping 36mm pumper Dell’Orto carbs breathing through dustbin-sized air filters. Seventy bhp at 5600 rpm was the claim, along with 70ft/lbs of torque at 4400 rpm.

Shorter stroke
The XR was a shorter-stroke engine than usual, mainly out of the need to squeeze the XR heads into the confines of the Sportster chassis. Okay, so 3.189 x 3.812 inches (seriously, that was the official capacity) wasn’t exactly an over-square high-revving lump, but it was significant for a Harley. With the lighter flat-top pistons, it had revving ability that few Harleys had before or since.

If you could afford it, you could even have the optional race kit. This consisted of a pair of utterly immense 40mm Mikuni slide carbs, hotter camshafts, a even noisier Supertrapp exhaust, original high output coils and HT leads, a steering damper, fork brace, Koni shocks and a different seat unit.

And that was what I’d just ridden. 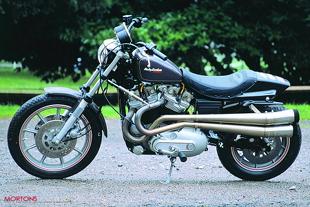 Very rare and desirable
The XR1000 is an impossibly rare beast. Only 1108 were ever made and they very, very seldom come up for sale. With the possible exception of the XLCR black cafe racer, this is the most desirable 'old' Harley ever.

Dennis Pain is the boss of Sunami Motorcycles in Morden, south-west London (020 8646 1554). Sunami is an independent dealership and Dennis’s forte is acquiring (and selling) truly mint exotic sports bikes alongside equally mint modern sports bikes and classics when he can find them. So you might find a Foggy Replica 996 sitting next to a Fireblade with five grands’ worth of extras next to an utterly original Z900.

This XR1000 not only has the full race kit but comes with all the original parts plus a sheaf of paperwork including Harley service seminar bulletins. "This kit is designed for closed-course competition only." Yeah, alright. The Mikuni leaflets say, "Due to vibration, the throttle shaft screw must be Loctited in place.” There are sheaves of other paperwork from the USA, where the original owner travelled to buy this animal.

And then you look at the speedo – only 1700 miles from new. If there are better examples than this, they’re probably in museums. Price? Yours for £12,500.

Bloody hellfire. What a din. Dennis holds the revs at 1500 rpm to warm it up. It still spits back through the carbs occasionally, sending little wisps of smoke up from the gargantuan air filters. Dennis lives in a rather salubrious private road in Surrey and I cast anxious glances at his neighbours’ windows.

"It stops spitting back when it’s warm," vouchsafes Dennis. "Okay, off you go." He doesn’t even say "take it easy". 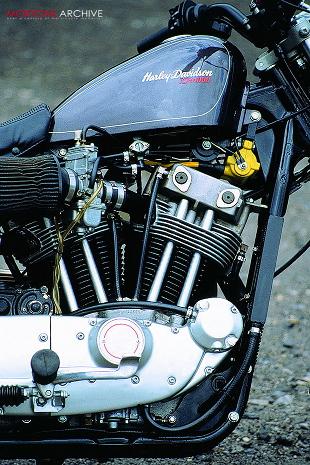 The throttle is impossibly heavy, a legacy of the huge springs inside those carbs. There must be mopeds with softer springs in their suspension. The clutch is light enough but it bites early. The air filters force you to stick your knee out.

I rumble down the road to the dual carriageway, experimentally twitching the throttle every now and again. Even with the slightest movement it barks forward, like a huge dog suddenly spotting a rabbit.

Onto the main A217, a quick look around for police (God knows why, the noise alone effectively says ‘nick me’) and it’s time to open it up. Hell, does it go. No winding up necessary – it just catapults away. The basso profundo rumble turns into pure concentrated thunder.

Passengers in cars twist their heads to see what’s making the noise before the beast lunges past their hermetically sealed and de-toxed Vectras and Mondeos.

Eighty-five mph and it’s feeling a bit flighty. Ninety and it’s moving about under me, squirming away and wriggling. I see 95 come up and then decide to shut it down. To be honest, I just don’t feel safe and the thought of dropping it scares me to death.

Smooth ride
What's surprising is how smooth it is. Every old Sportster I’ve ridden has shaken like an epileptic with hypothermia, but this one is smooth. True, the rubber-mounted bars help but the shorter stroke and lighter engine internals are probably more the reason. Whatever, you can ride it without your wristwatch shaking to bits (don’t laugh – it’s happened).

The four-speed gearbox is a hindrance. First, second and third come and go and then you drop it into fourth and discover a huge chasm. It’ll pull the gear all right and makes cruising relaxed but it really needs another ratio slotted in there.

Besides, when the engine’s blaring like a Sopwith Camel in third, it just takes the edge off the noise when you change up. You can maintain that fantastic symphony in the first three gears but then you lose it for a few seconds until the revs rise past 4000 in fourth.

It doesn’t handle. Despite the fork brace, Konis and all, it just doesn’t. But then that’s not what it’s for. It’s for racing or for making an urban statement. 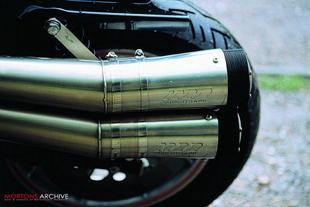 I’d never buy one, even if I could. I couldn’t live with the noise, the ridiculously small fuel tank, the silly seat, the discomfort, handling, anything. Dynamically, this bike is a farce. Nothing works at all, except for that thunderous apocalyptic engine. And the looks. The looks. Oh yes, the looks. Have another squint at the pictures.

"I shouldn’t really sell it," mused Dennis. "I just ought to keep it." I know what he means: stand it in your front room and drool over it, and then, very occasionally, on a nice sunny summer afternoon, put it on the road and use it the way it was intended to be used nearly 20 years ago.