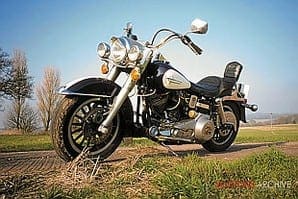 Although Harley has flourished more recently, back in the Seventies the situation was far less rosy. Just as happened in Britain, once the Japanese started to make large capacity bikes, America’s only remaining large-scale manufacturer found it increasingly hard to compete.

Not that they even tried, it could be said. Having given us their first V-twin in 1909, sixty years later Milwaukee was still churning out something very similar. Most people weren’t interested in bikes with 25 year-old 'character'. As the instant success of the Honda CB750 four had proved, what they wanted was a fast, smooth and sophisticated machine that didn’t break down. Being cheap was just a bonus.

In those days, when the Sportster really lived up to its name, Harley-Davidson still made some of the fastest bikes on the road. But sophisticated and smooth? Nope.

Away from the American obsession with straight-line acceleration, the other important facet of motorcycling on the other side of the Atlantic was touring – covering big distances on big bikes, loaded with luggage. In this market Harley offered the Electra-Glide, christened in 1965 when the thundering great Panhead engine in the Duo-Glide gained an electric starter.

That in itself was quite a novelty then (the electric foot had actually debuted on Harley’s weird Servicar three-wheeler the year before), but in other respects the Glide wasn’t exactly high-tech. Both its chassis and V-twin engine were best described as crude.

The Panhead was replaced by the Shovelhead in ‘66, but as the saying goes, the more things changed, the more they remained the same. Yet, thanks to a pair of jumbo-sized tyres, the Glide had one major advantage over the opposition – the ability to carry a huge payload, which is a major consideration when a couple of diet-fearing Americans want to make the Big Trip.

Triumphs, Nortons and the rest, including BMWs, were severely limited in load capacity. Once the rider and pillion were in place, there was simply no way of adding the fairing, panniers, topbox, kitchen sink, etc. And even if there had been, their engines had nowhere near enough torque to lug it all along.

Honda eventually gave America a suitable bike in the form of the GoldWing, but even that suffered from lack of load capacity. So, in the late 1970s there was still at least one reason, apart from patriotism, to buy an Electra-Glide like the one seen here.

Last of the iron-age
The test bike is a 1980 model, in fact, but what really matters is that it’s one of the last iron-age Harleys, made before the company started to buck up its ideas when it came back under control of the founding Davidson family in 1981.

Aficionados will spot that it isn’t in standard trim (is there any such thing as a standard Harley?). For a start, an Electra-Glide Classic would have originally been a sort of beige brown, rather than red, white and blue. It would also have been adorned with a vast fairing/screen and luggage-carrying equipment, all helping to make an already large motorcycle into an enormous one.

The engine is basically as per factory spec, except for one obvious alteration to the intake arrangements. Earlier models used Bendix or Tillotson carbs, but Harley increasingly sourced parts from Japan, so there would have been a Keihin hiding behind the chrome air filter box by 1980.

In this case the previous owner, who bought the bike nearly 20 years ago, fitted an SU. As used by millions of post-war British cars (and Triumph Thunderbirds in the 1950s), the Skinners Union constant vacuum carburettor is a very clever device. I recently rode a Norton Commando with a single SU and it seemed to go at least as well as one fed by the normal pair of Amal Concentrics.

Even without the added fibreglass (all the original parts are still with the bike, incidentally), the first thing that strikes you about the Glide is that everything is made on a grand scale. That especially applies to the front wheel and suspension. Identical 130/90-16 tyres appear at both ends, enough in itself to make you expect a different sort of motorcycling experience, particularly as the specified pressures are just 16 psi!

This bike had a kickstart, but an attempt to turn over two mighty 670cc pots with leg power was quickly abandoned. Although it might be possible if you’re 15-stone plus, my puny body weight could hardly budge the cylinders over compression. A man’s machine, plainly.

Fortunately, the electric starter and suitably massive battery are up to the task, making a noise like an enamel bucket being thrown against a wall. Once running, the Shovelhead engine quakes and quivers menacingly in the frame. The long fishtail silencer doesn’t do much to please the Noise Abatement Society, so a blip of throttle produces a bass rumble that rattles windows. They really don’t make ‘em like they used to – not even Harley!

Vast and heavy though it is, at low speed the Glide is easy to control once you get it pointing in the right direction. The seat is low, and the handlebars are in a comfortable position. Although the steering is always light because there’s so much leverage, the wide bars do cause some problems in sharp turns, simply because the grips move so far on full lock! Long arms a definite advantage here.

Gears are selected by a heel-and-toe pedal hovering above the footboard. Unlike some similar devices (the Russian Ural comes to mind) you can use it like a normal pedal without knocking chunks out of your boots. That’s not to say the gear change is any more subtle than the rest of the bike. Each of the four ratios available thumps into place with a noise that leaves you in no doubt that some very large cogs are being stirred.

Crunch into top
Unlike most motorcycles made in the last 40 years, the big V-twin, enlarged from 74 cubic inches to 80 in the late 1970s, works best if you crunch into top as soon as possible and leave it there. At anything over about 35 mph a twist of throttle will then catapult about 800 lbs of motorcycle, plus rider, forward at a satisfying rate.

For the record, it was surprisingly easy to send the needle of the traditionally out-of-sight tank-mounted speedometer towards the end of the dial. Don’t get too excited, because the calibrations stop prematurely, as required by US law at the time. A Hayabusa, it’s not.

Doesn’t sound like one, either. That ‘potato-potato’ exhaust note in its pre-stifled form is an essential part of the appeal, of course. Rolling along at the ‘double-nickel’ (that’s 55 mph if you don’t speak American), the commotion produced under acceleration dies away, leaving a relaxing distant thunder.

At this sort of speed vibration is kept under control quite successfully, too. The engine may not be smooth, but there’s so much rubber mounting that all you feel is a subdued tremor.

Provided the road is fairly straight, the handling works quite well in cruise mode. No doubt the absence of that huge screen helped. It would be a shock if something so large attached directly to the handlebars didn’t act like a wind vane.

Suspension came late
Suspension came quite late in Harleyland: telescopic forks replaced springers on the 1949 Hydra-Glide, and a rear swinging arm arrived in ‘58 to create the Duo-Glide. Once done, further progress was hard to spot for a few decades, although Japanese Showa forks were used by the time this Glide hit the road.

In a way, the suspension probably worsened over the years, because the sprung seat eventually disappeared, losing the third line of defence against bumps. Third? Well, the fat, low-pressure tyres probably do much to smother surface irregularities. In any case, the main (only?) advantage of a kerb weight approaching 800 lbs is to increase the ratio of sprung to unsprung mass, which should improve the ride. (Or flatten the tarmac as you go along.)

So, as a slow to medium speed cruiser, on straight-ish roads, the Glide is quite functional. It can even provide good economy, despite the displacement. There’s also plenty of evidence to suggest that the Shovelhead engine is capable of clocking huge mileages.

Unfortunately, everything goes drastically wrong in other circumstances. Although 70 mph plus should be no sweat for the engine, that’s not the subjective impression. Twisting the throttle wide enough to get the speedo needle pointing towards your right knee sends vibration pounding through the footboards, to the extent that your feet start to slide off. Meanwhile, the exhaust gets pretty harsh, and plenty of less pleasant mechanical noises begin to intrude. Not so bad on a short hop, but a coast-to-coast blast would be hard work, even if it was Skegness to Southport rather than New York to LA.

There I was, potato-potato-ing along a familiar country lane, when a red blob appeared in the rear view mirrors. Once it got within a few inches of my back wheel the image was finally clear enough for me to make out that it was a modern car of the embarrassingly fast variety.

Mobile bottleneck
Aware that the Harley was something of a mobile bottleneck, I therefore speeded up a bit. Big mistake. Given any attempt to press on, the Glide is an accident  waiting to happen. It lurches all over the place and the steering feels only vaguely capable of influencing the direction of travel. Lean it over, and there’s always a grave danger of the undercarriage ploughing a deep furrow in the tarmac.

I don’t doubt that time-served Gliders can learn how to get along at a reasonable lick if they really need to (an HGV licence and some sailing experience might help). For a craven amateur like myself riding someone else’s valuable property, however, the only mildly cool option was to pull into a lay-by and let the rest of the world by.

Harley brakes were famously bad until quite recently, but I had no problems in this area. While the wooden feel doesn’t inspire much confidence, the single front disc coped well enough. The same goes for the rear brake, but as the SU carb made it almost impossible to apply foot to pedal, that hardly mattered!

Despite having ridden quite a few Harleys of this vintage, my time aboard the Glide was still quite an eyebrow-raising experience. Looked at with any sort of logic, AMF era bikes from Milwaukee (excepting the pukka racers) were pretty awful motorcycles. Slow, primitive, badly-made and expensive just about sums it up. Even the US Highway Patrol abandoned them in favour of Japanese machines.

The Shovelhead finally bowed out in 1984 to make way for the Evo big twins. By this stage quality was steadily improving and they’d tackled the vibration problem by rubber-mounting the engine instead of the rider.

Development has continued ever since, without messing with the basic 'Antiques Road Show' formula.
Judged by any rational means, the current tourers are far superior. Yet logic has never had anything much to do with motorcycle purchases, so there will be plenty of people who want a 'real' Electra-Glide like this.