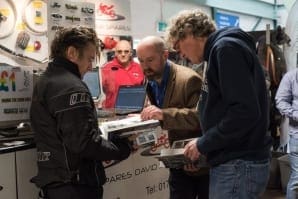 JAMES May and Richard Hammond were among the Staffordshire Showground crowd to see their personal motorcycle collections go under the hammer at a record-breaking Bonhams bike auction.

All of the 12 machines owned by the duo were snapped up by enthusiastic bidders, and the two shared laughs with onlookers as James May even jokingly bid on his first lot, a Yamaha ‘Fizzy’.

The Top Gear hosts also witnessed a 1939 Vincent sell for a staggering £275,900, a figure which helped take the overall sale to an all-time high of £2.2 million.

James Robinson, editor at The Classic MotorCycle magazine, said: “There’s always a buzz around the year’s first of two Stafford sales, and this result is great news for what we can all agree is a buoyant classic bike scene.”

A 2010 Norton Commando, owned by Richard Hammond, was the most successful item from the pair’s consignments selling for £15,180. A range of British and Japanese examples completed the line-up achieving a total of £77,625.

Bonhams’ motorcycle department international director Ben Walker said: “The level of enthusiasm at Stafford is always brilliant – with people travelling from across the globe to attend. We’ve seen some fantastic prices this time with a new precedent being set.”

Part of the Carole Nash International Classic MotorCycle Show, the annual Spring Stafford Sale took place this past weekend amidst a backdrop of hundreds of traders, thousands of classic display machines and a range of exciting live elements.

Thousands of two-wheel enthusiasts made the trip and were greeted with glorious sunshine at the flagship event on the classic bike calendar.

A new Restoration Theatre, hosted by TV personality Pete Thorne, proved popular with showgoers who were offered expert advice on several key areas of restoration and maintenance by The Motorbike Show presenter.

The event’s exhibition manger, Nick Mowbray, said: “The record auction results were the culmination of one of the most successful ever Stafford weekends as the show cemented its status as the world’s biggest classic bike event.

“All trade plots were sold out, there was unprecedented interest from clubs and private collectors to display machines and we saw increased attendance levels. It all bodes well for our next outing to Stafford in October.”

The Carole Nash Classic Motorcycle Mechanics Show takes place at the same venue on the weekend of October 17-18. More details are available at www.classicbikeshows.com.