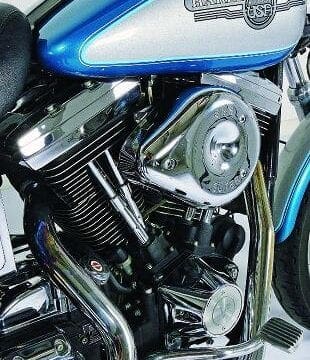 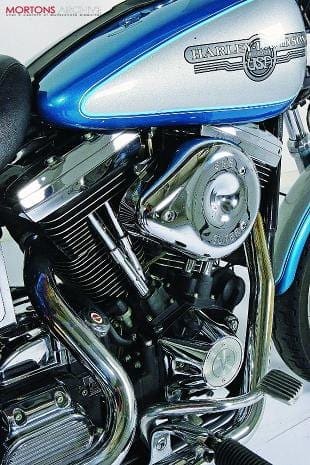 It all started back in 1971. Harley had the big FLH Electra Glide and the little XL Sportster, but nothing in between. In a moment of inspiration, Willie G Davidson stripped the panniers off a 1200 Electra Glide and bolted a skinny Sportster front end to it, and invented a new range of bikes coded FX (FL meets XL – get it?).

Monikered the Super Glide the bike was well received, once a few initial styling blips had been resolved. But it was still a big, crude lump; the ageing and unreliable Shovelhead motor was rigidly bolted into the chassis where it could transfer all its spine jarring vibrations straight to the rider.

Adapting the rubber engine mounts from the FLT tourer went a long way to help, and the resulting FXR (FX with Rubber mounts, still with it?) Super Glide II was a huge improvement, particularly the deluxe FXRS version. But it still had the oily old Shovelhead engine, now stretched to 1340cc and long overdue for replacement. That replacement came in ’84, when the new Evolution engine finally arrived. Long planned as a major step forward for Harley, the Evo motor addressed many of the Shovel's problems, with alloy barrels and completely new cylinder head designs (though the bottom end was essentially the same).

Quality control was improved too, the freeing of H-D from its AMF parent company in 1981 allowing new levels of investment in the production process. But the new FXR Super Glide (affectionately now known as a Rubber Glide) was actually a major departure from Harley’s usual philosophy. The design team was led by Rit Booth, who rode to work each day on a Guzzi LeMans, and included Erik Buell and John Favill, the ex-Norton designer who had worked on the Commando. They wanted to produce a European style bike with a torquey motor and good handling, and the kind of steering geometry and ground clearance normally alien to big Harley road bikes.

The Evo engined FXR was a revelation, at once courting a whole new audience of more sporting riders and alienating Harley’s traditional low-slung cruiser fan base. It was so successful in fact, that the FXR and FXRS rapidly sold out to the new style of rider, and hit market saturation. People who wanted one bought them and kept them, while traditional Harley riders viewed the Rubber Glide as a faux European interloper with its tall, steep geometry and distinctly un-Harley-like triangular side panels. In a panic, Harley's marketing department kicked out the front end, fitted longer forks and reduced ground clearance with shorter shocks to keep the bike selling, but the writing was on the wall for the FXR.

The replacement had to look more like a traditional Harley-Davidson, but the design team were determined to retain the qualities of that first FXR in the new FXD Dyna Glide. Marketing won out in some of the design decisions, and the Dyna lost the frame symmetry of the FXR and gained instead rectangular side boxes, reminiscent of the old Electra Glide's oil tank and battery box. The engine was tilted in the frame to move the crank away from the gearbox, producing the 'more traditional' long primary chaincase that marketing demanded, and the rear shockers were laid down at a steep angle despite complaints from engineering that it would compromise the bike’s stability in bumpy bends. 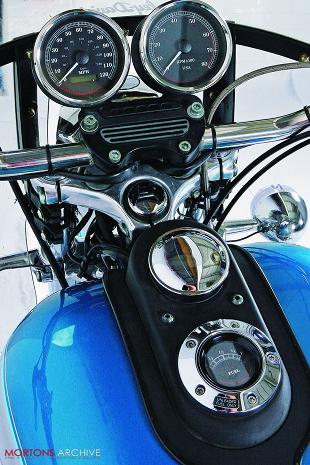 Despite the compromises the Dyna seemed to satisfy both marketing and engineering, and has gone on to become one of Harley’s best selling ranges. It's still in production, but from 1999 has been fitted with the 1450 twin cam engine, which replaced the Evo. For many, the new engine is too much of a sop to the demands of environmental legislation and, while it's revvier and more powerful, it lacks the low end grunt of the Shovel and the Evo, the very qualities that makes these bikes such fun to ride.

The FXR was one of Harley’s very own cult bikes, and the factory continued to release very limited numbers of them right up to 2000 – these are rare and expensive. Most bikes out there now will be FXD Dyna Glides of one kind or another. And for riders who still appreciate a little ground clearance and responsive steering, the Dyna Glide Sport and Convertible models (as pictured here) still have the original FXR's 28-degree frame rake, and still go round corners. The longer, 32-degree raked versions are a bit less chuck-aboutable, but still make good, reliable cruisers. They all have soggy suspension (as you'd expect) but that's easily rectified, and, if you can live with the odd footrest positions, offer all the qualities of a traditional torquey British twin, brought bang up to date and made to tighter quality standards than you might expect. And they pull like a train, cruise happily at 80-plus, and do 45 miles to the gallon.

What goes wrong
Surprisingly little. Harleys gained a reputation for unreliability in the 60s and 70s when the ancient Shovelhead leaked and rattled its way around in the wake of lighter and faster British twins and new-wave performers from Japan. But times changed, and the combination of Harley-Davidson becoming an independent company in June 1981 and the adoption of better design and engineering practices with the Evo engine went a long way to sorting out the problems.

If you've any experience with old British bikes the Harley's engine layout will be broadly familiar – it's a pre-unit design with separate engine and gearbox, linked by a wet clutch and a huge primary chain living in the enormous engine cover on the left-hand side. Despite the ‘don't touch it’ fokelore from the dealers they're a doddle to service – ignition is electronic and there are no tappets to set (the valve operation uses hydraulics). 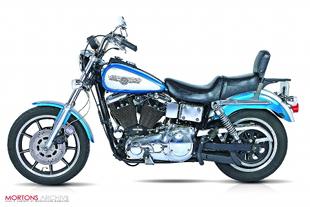 Early carbs can be troublesome, but late models are fitted with Keihins as standard, and aftermarket carbs (S&S Super E, for instance) are common and a big improvement. Rear drive belts are clean and maintenance free and last for around 40,000 miles, though if one should snap you'll have to strip the whole clutch and primary drive to change it. Regular oil changes with good old 20/50 will keep the motor happy – you'll need Harley’s own primary and gearbox lube, both separate from the engine. Gel batteries are standard from the mid-90s and require no topping up.