You really can’t miss Europe’s very best off-road event: the Dirt Bike Show! The event is once again being held across four days – October 26-29 – at its traditional home of Stoneleigh Park in Warwickshire, in partnership for a second year with oil and lubricant giant MOTUL.

This year you will see plenty of off-road action from classic old stuff to modern bits of kit and this year the fun-factor has been ramped up yet further with the news that 12-times trials world champion Dougie Lampkin’s display team will be at the event. And that’s not all. This year will also include a Motoball match between France and Germany, where the four-strong teams will go wheel to wheel and try and score past the opposition goalkeeper, who is on foot! There will be the Minibike Supercross track, the Wall Of Death and many more have-a-go experiences. 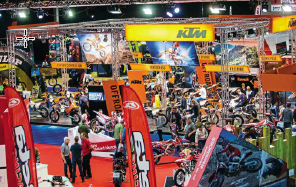 Major manufacturers including Beta, Honda, Husqvarna, KTM, Sherco and Yamaha and the Monster Energy DRT Kawasaki race team will also be attending for the first time. Hundreds of traders will be offering fantastic deals on a huge range of riding gear and accessories in the retail hall too.