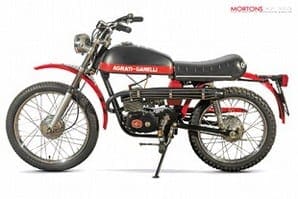 It’s 1972 and the tin roof of the school bike shed is reverberating to a new vibe. The sixteener law has killed the elderly Brit and slightly shabby Jap 250s acquired via countless cold ‘n’ wet paper rounds in favour of mopeds. Naively HMG believes this new anti-youth dictat will condemn kids to an asthmatic, rusty revolting Raleigh or a perambulating Puch.

However, the motorcycle importers are a lot more market savvy than they used to be. The teenagers now have ready access to HP or parental disposable income. What’s more they want transport with style and there’s a legion of manufacturers out their ready to oblige them in their aspirations. With one more deft twist of the wrist Spoilt Brat fills the bike shed with a cloud of cheap two-stroke and heads off to the sixth form block for registration and double Eng. Lit. The lesser mortals of the secondary modern still gaze in disbelief and unabashed envy at the coolest fifty they’ve ever seen. With ears ringing and eyes smarting they too shuffle off dreaming of the day they’ll have a bike. 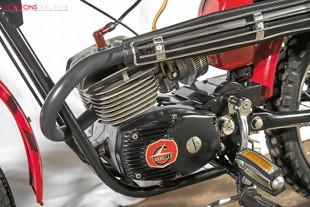 Garelli was stunningly fast out of the blocks when the axe fell. With a motorcycle now out of reach until 17 years of age the disaffected yoof wanted, needed and demanded the sexiest moped they could have and here it was, the Garelli Tiger Cross. Its equally fast, road orientated, non-identical twin (the Rekord) was also available but the Tiger was the one to go for. Yellow and black tank, shiny motor, rasping high level exhaust and the potential to top 55mph… it didn’t get much better. Suddenly nothing else came anywhere close, anyone with a soul wanted a Garelli Tiger Cross. In actuality Garelli was in the right place and right time with a 50cc motorcycle that could be swiftly, cheaply and easily adapted to fit the peculiarities of an ill-conceived UK law. Even if the reality was a little less pleasant than the dream, Tigers sold remarkably well.

Anyone who has encountered products of the late 1960s and early 1970s Italian automotive world will be painfully aware of its strange vagaries. A good Garelli/Alfa/Ducati/Lancia was an item of supreme bliss but a bad example was hell on earth; even a moderately well built example was potentially purgatorial. Build quality was capriciously variable, externally sourced components erratic and anything electrical of worryingly wavering potential (sic). Yet none of this mattered, the bike or car was designed with passion, style and flair; reliability was a secondary consideration.

Fast forward to 2014 and foibles of any Garelli will now be well known and much easier to deal with. Although not made to the closer tolerances of a Fizzy or AP50 the Tiger has an intangible something that just fires up the soul of anyone besotted by sports mopeds. Perhaps one of its chief strengths is that it was designed and built as a full motorcycle that just happened to be a 50. It almost has a heart as compared to a power unit. There’s a real character to a Garelli that’s somehow missing from any equivalent Oriental offering. The Tiger is also configured like a proper motorcycle unlike its European marketplace rival the Puch VS50. No gear shift on the left-hand bar or back pedal rear brake for the Garelli. Both are taken care of by foot levers like a real motorcycle.

Garelli Tigers were about for a long period but the slo-ped laws effectively negated their one outright advantage, speed. As soon as the fifties were limited to 30mph the overt reasons for owning one were nullified. Almost overnight there was little real justification for buying a new machine that couldn’t be used to its full potential. Equally important styling had moved on a machine that had been drafted up at the end of the 1960s was going to struggle against machines of the 1980s. As the Garelli’s star swiftly waned the Japanese mopeds became omnipresent. No longer road legal, many a Tiger Cross ended its days as a field bike being literally ridden into the ground. 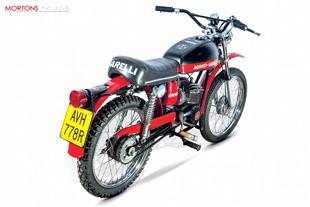 Those that survived were often poorly stored, ignored and overlooked. To comply with the new laws Garelli had to emasculate the Tiger by fitting a 14mm carb and ludicrously high gearing. Despite gaining an extra ratio the bike was but a shadow of its former self and even Agrati didn’t dare use the famous name. The new KL50 5V Cross (just like every other slo-ped) was more kitten than cat.

Thankfully the huge interest today in sports mopeds has seen the Garelli Tiger Cross returned to its rightful position as heir apparent to the throne. Some of us at CMM are old enough to remember the my-moped-is-fastest farrago and have no desire to reignite the debate. As an ex-Mobylette SP93 this column knows its place in the pecking order. Suffice it to say if we had to choose a sporting, genuine, sixteener moped we’d be looking directly into the eye of a Tiger.

Which to buy?
If you thought Japanese bikes were difficult to source spares for try a Garelli. Although popular back in the day, they never sold in the same numbers as the AP50 or FS1E. Add this to the infamous spares support from the importer Agrati and you’ll realise why you should be buying the most complete Tiger Cross you can afford.

Don’t tell us you weren’t warned but if you have to buy a rolling chassis, a V5C and a few rusty bits of tat, you’ll be parting with £500. Even less and no V5 may well save you £200. A good tidy runner should be viable around the £1500 mark. Examples such as the one in camera have recently been sold for £2600 but even this may be on the low side depending upon demand.

From M reg on the Tiger was made down to price with easy to manufacture black engine cases replacing the time consuming and thus expensive polished alloy covers. There was a lot of cost cutting and quality items such as the Ceriani forks were swapped out for cheaper alternatives. For these reasons our money would, ideally, be heading towards the earliest model we could find. That said any tidy Tiger Cross is still going to bring its owner a large slice of street cred.