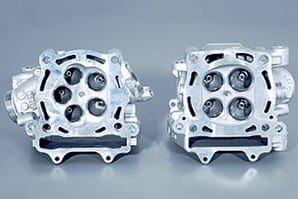 The four-valve head… the 16-valve motor: the name trips off the tongue as the cutting-edge of suck-squeeze-bang-blow technology. We loved this in the 1980s, in the bike or car world, and both forms of transport would be emblazoned with ‘16 valve’ or ‘four valve’ in a bid to lure us into mad HP agreements we couldn’t possibly afford.

Four-valves-per-cylinder heads had been buzzing around in Spitfires since the Second World War and before: they’d even been in Formula 1 for a good few years before we saw them really take hold in motorcycle motors.

But, like razor blades, if four is better than two, then surely five is better than four? And the marketing people loved this: if a bike or car boasts that it has 16 valves, surely a 20 valve car or bike is better and therefore has a technological edge and is therefore easier to sell by the container-load?

The five-valve head – in theory – has always had a lot going for it: with two exhaust valves and three inlet valves, you have valves of similar size and better flow (theoretically you’re able to pass up to 10% more air through the cylinder head than the four-valve layout), higher RPM and as a result more outright power.

Yamaha, Aprilia, Audi and others have jumped on the five-valve bandwagon –Yamaha most notably first with the likes of the FZ750 and later sports machines such as the YZF-R1 series.

The counter-argument was that the production costs were higher and the advantages minimal, so where did the truth lie?

For this let’s go to Northampton.

Cosworth Engineering, based in that very town, was a driving force in automotive excellence. It had built a series of ground-breaking engines in many different formulae of racing, including the legendary DFV (Double Four Valve) V8 engine for Formula 1. And it was this engine – the most successful F1 engine of all time, winning races from 1967 to the 1980s – that would be part of an interesting five-valve story.

Cosworth was forced into the five-valve game, via links with Ford who in turn had become interwoven in the late 1980s with that of Yamaha. The Japanese firm wanted into car racing, and in car racing no normally aspirated engine was better than the DFV-derived series of motors, even following the turbo era.

Yamaha was contracted with Ford USA to produce a number of high-performance versions of its road cars, so there was the link, and via Ford, it asked to put a five-valve head design on to the venerable DFV V8 F1 motor. Interestingly, at the time in Japan F3000 racing was mainly fought between the Cosworth DFV-powered cars, and Honda’s V8 – so corporate pride was at stake.

But, despite the theory of more power thanks to better flow, the fact that these F3000 engines had a rev-ceiling meant the power never showed up. Despite this the deal was broadened to fit a Yamaha head to the DFZ (later version of the DFV) bottom end for use in Formula 1. The DFZ produced 565bhp and Cosworth was predicting 600bhp for the five-valve motor, while Yamaha insisted that 630bhp was possible. After delays, a five-valve motor finally ran on the dyno in late 1987 with the power curve being described as ‘disastrous’ and ‘erratic’. Yamaha built five engines and all disappointed the Cosworth engineers of the time. It wasn’t even competitive with its four-valve original. In a splendid display of British humour, Cosworth’s Geoff Goddard sent a fax to Yamaha stating: “Please arrange a search party, we appear to have a leak on our dyno as there must be a big puddle of horsepower on the floor.”

A parting of the ways ensued: Yamaha set out to prove that five valves did work with a disastrous pairing with Zakspeed in 1989, while Cosworth ploughed on with a four-valve motor, which was the forerunner of the HB series of F1 motors.

That wasn’t the end of the five-valve story for Cosworth, as the road-car side was bought by Audi in the late 1990s and it built Audi’s 20-valve motors for cars like the Cabriolet in its Wellingborough plant. By 2000, when this author was working there, the best engineers were still dismissing the five-valve layout, even if publically it could not.

So what of Yamaha?
The ultimate proof of this ported pudding is that the Japanese firm – often the innovator in the world of performance motorcycling – eventually realised that there simply was no real performance gain, as from the 2007 model year the YZF-R1 went to a four-valve head.

And, let’s face it: Yamaha only won the World Superbike title on a four-valve R1 in 2009, didn’t they?