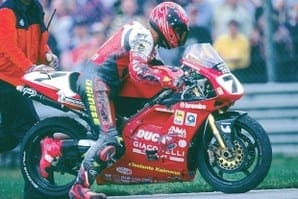 First, British double champ Carl Fogarty knew that he had to win there to have any hope of the title. Going into the Dutch round he was in third place 19 points behind series leader Troy Corser. With Assen being Foggy’s favourite track, surely he could make up some ground? For Italian Pierfrancesco Chili, it was about fighting for a job, as he had been told that only the top two Ducati men would have a ride for 1999.

Race one saw Fogarty lead, before Chili slid past to win on the last lap. The British rider was in typical bullish mood: “I’m the only rider who knows how to lead a race around here,” he said after Chili won. Then came race two. It was identical to the first, but this time on the last lap they were dicing in the fast curves and it looked as if Chili had to back off. Going into the final chicane Chili crashed, leaving Foggy to take the win. An incensed Chili tried to punch Foggy in parc ferme (despite his Shark helmet still being in place) after the Italian had managed to get back to the pits. Then – at the post race press conference 30 minutes later, in walked Frankie – in a fetching blue towelling bath robe, accusing Foggy of dangerous riding, prompting another stand-off where journalists and team members had to pull both riders apart.

Fogarty went on to win the 1998 title in Japan and Chili made a switch to the Alstare Suzuki team for 1999. Both eventually became friends again.

Frankie is our VIP guest of honour at the 21st Carole Nash Classic Motorcycle Mechanics Show on October 18-19.