Fans’ Favourite Whitham Set For Newark Show
James Whitham will guest star at the January 9-10 Newark bike show
One of the most popular British riders ever, Whitham will be on stage several times throughout the weekend of January 9-10 being interviewed about his life and career by fellow former competitor Steve Plater.

Exhibition manager Nick Mowbray said: “James is a great speaker. He offers excellent insight into today’s racing scene in his TV duties, and has many stories to tell from a fruitful career which saw him win races across the world and two British championships. He’s got a great sense of humour too, and his rapport with Steve will be thoroughly entertaining.”

The rest of the Carole Nash Classic Bike Guide Winter Classic will include hundreds of trade stands and autojumble plots packing in to the halls of the venue giving visitors the chance to pick up parts, spares, tools, accessories, clothing, memorabilia and more.

Nick said: “We know that James has a few classic race bikes of his own, and we look forward to what he’ll bring. That’ll just be the tip of the iceberg though, there are some really special entries lined up.”

Also part of the event is two dedicated scooter halls which will mix displays, trade and jumble with interactive attractions such as the Skills Area and an Engine Rebuild competition. Former British scooter and sprint champion Norrie Kerr will be the Scooter World special guest for the weekend.

Advance discount tickets are on sale now from Classic Bike Shows, with a one-day adult pass costing just £8 – a £2 saving against gate prices. 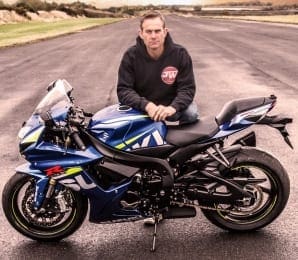