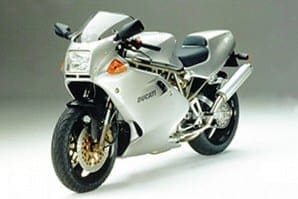 It’s 1991 and the Bologna SuperSport machines feature a white frame which sets off the blood-red colour scheme perfectly, I thought it couldn’t get any better, but fast-forward seven years and my ultimate incarnation of 900SS is born – the FE or ‘Final Edition’.

The FE was built to celebrate the last of the carburated 900cc supersport air-cooled Ducatis and only 800 were built worldwide: 300 went to the USA and the remaining 500 to the rest of the world.

Bagging a ride on one for a photoshoot back in the summer of 1998 was a joy. I’d ridden 900SS’ before and appreciated the way they go about their work: 70-or-so horses (20 down on the inline four 600s of the day) and simple suspension may not sound like much even then, but for a visceral point-and-squirt machine, the SS had few equals, especially when mated to some loud Termignonis. It clatters, it bangs, it farts and it wheezes, but when it works it really stirs the soul.

And after swathes of red 900SS machines before it, the simplicity of a single-seat and an all-over silver paint scheme really set the bike apart, although rumour has it that a number of UK bikes were repainted red.

Okay, so even back then it had issues (I remember having to zip-tie one of the upswept pipes as the mounting bracket cracked) and if you’re in the market for any SS, you’ll need to ensure the motor has been well looked after. Early ones suffer from awful build-quality and finishing, so the later the better, which makes the FE better than the rest – if you can find one.

Sure, some may argue that the SL or ‘Super Light’ is the one to go for, but with my girth, who would I be kidding? The Final Edition is the one for me.

The dream realised
“I’d toyed with the idea of buying a 748, but backed out and it was when in Dijon at Les Coupes Moto Legende that I saw a gorgeous 900SS Superlight in yellow and I was hooked!

Back in the UK I looked for the right bike, but nothing came up, until my mate Robin sent me a link to my future FE. It was love at first sight, it had been garaged for a while and had only 12,000 miles on the clocks. Better still the guy selling it was open to offers. I bought it for £2400!

It needed a service, the petrol light didn’t work and a few hoses were rotten, but once sorted, it rode fine.

“I’ve since realised it’s been dropped at some point, and parts of it can look a little tatty.  I still have some work to do on it, perhaps even having the wheels repainted, but I love riding it, so those jobs can wait. I’ve enjoyed two track days on it: it’s light and loud and stops on a dime. Best of all there aren’t that many around. I’ve done about 6-7000 miles on mine in a couple of years.” Barry Tavner