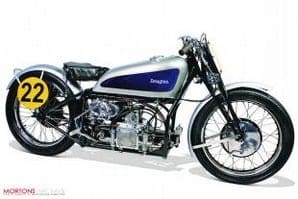 Striking specials have long been a feature of the classic world and some of the really special ones are the examples that perhaps don’t look too special or non-standard at a glance, which is a category this Douglas twin falls into. In car parlance it’s a ‘street sleeper’ – ie something that looks like a standard model but actually packs quite a punch.

This Douglas though isn’t a recently constructed special – its history is far more fascinating than that. The story goes that in 1948 Len Broomfield commissioned a special lightweight Douglas frame to be built by his brother, who was then working at Triumph in Meriden. The frame follows Douglas practice (indeed, is a copy of the standard frame) but is significantly lighter than the original. What makes the frame even more interesting is that at the time, Len’s brother was working in the competition department at Meriden and it was here where the new and improved Dougie frame was manufactured. Whether Triumph top brass knew or not is entirely open to conjecture!

Lightweight frame
To the new lightweight frame was fitted the 1928 Douglas engine, though it had been significantly breathed upon, receiving a new crankshaft, conrods, valves and pistons, which were all to ‘race specification.’ To the engine was added a four-speed Norton gearbox, fitted above the rear cylinder of the fore-and-aft twin. Bracebridge Street was also the origin of the front forks and front brake.

After being used by Len Broomfield, the Douglas passed into the ownership of arch Douglas enthusiast Colin Clifford who campaigned it in vintage races and the like, continuing its development all the time it was raced. In later years, it was ridden by Paul Gibbs, who managed a win on it during its last competitive outing, during a VMCC race meeting at Cadwell Park in the mid-90s. After that, it was retired and formed part of the impressive Clifford collection of racing and road going Douglases.

The collection came up for sale at Stafford in 2007, at the Bonhams auction during the Classic Motorcycle Mechanics show. Here, it caught the eye of local garage owner Dennis Bunning, who liked it significantly to add it to his well stocked stable. The machine had become somewhat tired and so was treated to a full restoration; what has resulted is a superb and unique Douglas special.