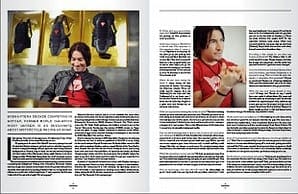 Four online magazines are planned for 2012 and will delve into the 1970s, 80s, 90s and 2000s, showcasing the people, events and products that have created the legend.

Issue one recounts Lino Dainese’s late 1960s trip from Italy to London on a Vespa, and how he was attracted to the large capacity British bikes and their culture, vowing to create his own motorcycle company, highlighting the images and influences from the decade of long hair and groovy shapes.

By 1972 he had realised his dream, founding Dainese in Molvena in Italy.

Each digital issue will explore a different decade of Danises's history, telling the stories of those who truly made their mark and influenced the next generation.