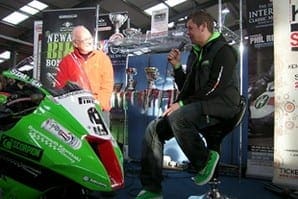 Born on March 27, 1955, he received help from French rider Patrick Pons, who recognised Christian’s immense talent early on. Christian made his international debut in 1976 and by the following year had won his first 250cc race in West Germany.

Injuries would always blight Christian’s career, as one paddock wag put it: “Christian doesn’t mean to be dangerous, he just is!” Sarron was well-known as a supreme talent in the wet. Sure he crashed a bit, but he could ride and he was always a delight to watch. His efforts on track were finally rewarded by the 1984 250cc World Championship.

In the big class Sarron won the 1985 West German GP and was a regular podium finisher until his penultimate racing year in 1989.

After he retired as a rider, he became a team manager for the French Sonauto Yamaha team, before one last race at the 1994 Bol d’Or, winning it with his younger brother Dominique.  A year later, he went on to manage Colin Edwards in the Yamaha World Superbike team. CMM’s own Niall Mackenzie raced for Christian in 1991 and says: “Christian is a lovely guy, with a typical latin temperament!”