A RARE American motorcycle will be up for grabs when a new auction of vintage, veteran and classic machines makes its debut at one of the UK’s biggest autojumbles.

The 1912 Pierce 600cc single is being offered by Charterhouse Auctioneers in the sale which takes place during the first day of the Carole Nash Eurojumble, set for Friday and Saturday, September 4-5.

Charterhouse’s Matthew Whitney said: “Due to low production numbers, Pierce motorcycles don’t come up for sale very often in the world, let alone in the UK. Expected to fetch its owner £50,000-£60,000, this is a truly superb lot, and we’re excited to add it to an ever-growing variety of bikes.”

Based in Buffalo, New York, the Pierce-Arrow Motorcar Company was most famous for producing luxury cars, and was responsible for manufacturing the first official motorised transport used by the White House. A subsidiary organisation, Pierce Motorcycle Company, operated until 1913 before going bankrupt, reputedly unable to sell bikes for more than the cost of production.

The particular example in the auction was shipped to the UK by its Canadian owner who served as a soldier during the First World War, before it was officially registered in 1922.

Matthew added: “The Matchless, which is one of only 60 made, has been beautifully restored and has featured on the cover of both The Classic MotorCycle and Vintage Motorcycle. Also restored, with the combo still in need of completion, the AJS has been in the same ownership since 1958.

Bringing together traders of parts, spares, tools, accessories, memorabilia and complete machines, the event itself is recognised across the classic motorcycle scene and, owing to its south coast location of Netley Marsh, welcomes thousands of visitors from across the UK and the continent.

As well as the introduction of the auction, this year’s running will also see the return of additional Saturday trading in the form of the Garage Clearout. Members of the public are invited to attend on the second day with the contents of their garages, sheds and workspaces, and take up a one day trade plot starting from just £20.

Head of the event Richard Graham said: “Netley is a staple of the classic motorcycle calendar and bike owners, riders and restorers can expect to find an excellent variety on offer from a range of traders.

“With the inclusion of the auction on Friday and our efforts to increase Saturday trading, we look forward to this being one of the biggest and best yet.”

For further information on the event, including for trade and ticket details, visit www.classicbikeshows.com.

Charterhouse is still accepting entries for the auction. Interested parties should contact Matthew Whitney, department head, by calling 01935 812277, or by email – [email protected] 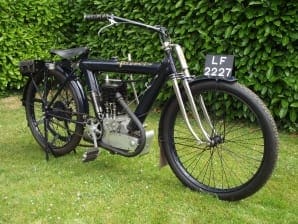