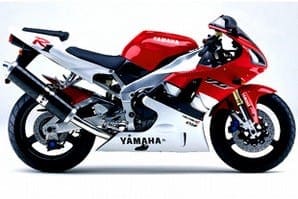 Motorcycling as a lee-zure sport was a good five years down the road. It didn’t matter that they had way too much power and that tyre technology needed 10 more years to catch up. The fact was that you couldn’t ride a CBR600 without an overwhelming curiosity that…‘If this thing goes so bloody fast it makes my whole body water, just how quick must that FZR1000R be?’ £1000 down and £135 a month was all it took to find out. 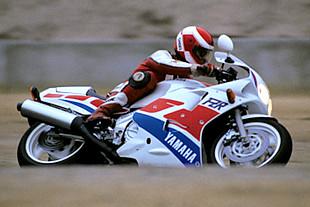 Yamaha FZR1000
The first and last of an era, Yamaha’s big FZR was a blueprint for the modern sports bike. Alloy beam frame, 17in wheels, engine canted forward, EXUP exhaust valve, rudimentary ram air system and a riding position that owed more to a real racer than a comic-book, backyard caff-racer (ever ridden an early GSX-R? you’ll know what I mean).

In 1989 the FZR was untouchable. So much faster than anything else, so much more nimble and composed in the corners too. The engine had grunt and top end thanks to careful tuning and the amazing dancing EXUP valve.

It was also the easiest bike to derestrict to full power. But the big FZR was also the last of the line of heavyweight super bikes. At 209kg, it was light for 1989, but three years later Honda’s FireBlade showed saving weight was more important than power and, overnight, the FZR felt like a barge.

But the FZ was still the better road bike for a year or two before tyre technology caught up with the flighty FireBlade. But the future was written… the FZR was finished. And prices fell fast. FZRs have been bargain basement for years now, bumping along the bottom, neglected or streetfightered. That so many are still running is a testament to their strength. Rescue one now and surprise yourself how good they still are.

1998 Honda Fireblade
The 98 Blade will be a classic because  they sold by the boatload. Parallel imports meant a brand new Blade for £5000. It didn‘t matter how good Yamaha’s R1 was, more people bought a Honda and their nostalgia will make it classic in 10 years’ time. Faster, lighter and more comfy than the original. Better brakes and suspension too.

Aprilia RSV1000R
Aprilia gave us £5000 of Ohlins suspension, OZ wheels, single seat and carbon detailing for just £2000 more than a standard RSV. Worth it because the suspension was the weak point of the original RSV. The RSV-R was the best road going big twin of the late 90s and best value too. Today they’re stupidly cheap. 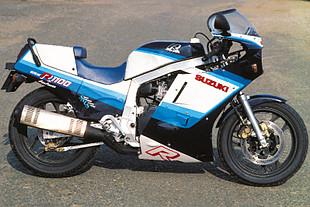 Suzuki GXR-R1100G/H/J
The first GSX-R1100 wasn’t that powerful. At 105bhp it made less than the outgoing GSX1100. But the GSX-R weighed 35kg less, looked like a racer, wore a previously unheard-of 150-section back tyre and every 21-year-old brickie and plumber simply had to have one.

A Vance and Hines pipe (Eagle for the impoverished) and ignition advancer gave 20bhp more and a million mph soundtrack. The riding position was cartoon racer – knees round your ears, fingers round the front wheel spindle and the GSX-R had a crispness and a throttle response like nothing else. Back then we didn’t know that the suspension wasn’t that great or that by 1987 the tall cradle frame would be obsolete. We just wanted one.

The 750 will always be the more significant machine because it broke the mould. Which makes the bigger bike something of a bargain – if you’ve still got the knees to ride it.

Kawasaki GPZ900R
He’s not the messiah, he’s a logical engineering development. Some people worship the GPZ900R like it fell from the skies. Which is piffle. The big Kawasaki moved things on in 1984 but much of that was either logical development (water-cooling and compact design) or heading for a dead end (spine frame, 16in wheels, anti dive).

But you can’t ignore that the GPz was the first modern superbike. In 1983, you needed 1100 cee-cees to be a real man. In 1984, it took just 499 (RD500) or 908 (GPz). The big Kawasaki went like stink, handled like a middleweight and was all-day comfy with a full fairing and fat seat. Suspension that worked, brakes that out-stopped anything and a price tag that anyone with a job could afford.

Ride one now and it feels sluggish, long and heavy – that’s how far we’ve come. But it’s still a great road bike and very, very cheap.

Kawasaki ZX-10R
Crazy bikes will always become classics. Kawasaki’s 2004 ZX-10R is the last great crazy machine. Too hot to handle unless you happen to be the Batley Sphincter-clenching champion. 20bhp more than an already-flighty ZX-6R and 5mm less wheelbase. No steering damper. What do you expect? 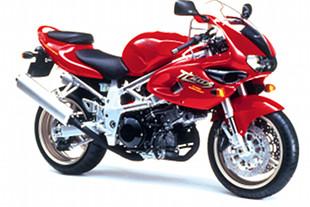 Suzuki TL1000S
And talking of crazy… sharp fuel injection (the first ride-by-wire system) and loads of torque made the TL hilarious. Until you hit a bump and then it all went slappy… allegedly. Some suffered, others didn’t. Suzuki recalled for a steering damper and detuned it. Only the 1997 bikes deserve classic status.

Suzuki GSX-R1100K
Suzuki put a bored-out, tuned-up GSX-R engine in a shorter, sharper, heavier chassis with suspension where the adjustments actually made a difference. It was a nightmare. No one ever worked out why the 1989 GSX-R1100 handled so badly, but on modern tyres they are much, much better.

Ducati 999
Faster and lighter than the 998. More accommodating with adjustable seat and footrests. But the 999’s radical styling bombed. Shame, it’s a cracking bike. Occasional electrical glitches from the high-tech can-bus loom on the early bikes should be sorted and time has been kind to the 999’s styling. Another 10 years and it’ll be a classic. 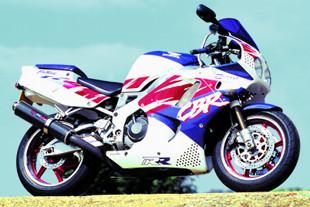 Honda Fireblade
Superbike V2.0. Everything changed with the 1992 Blade. And yet nothing really moved on. The only new tech was a production process – the Blade’s cylinder barrels were cast into the top crankcase – and that had been debuted on the 91 CBR600. What made the FireBlade special was weight; 25kg lighter than an FZR1000 but with all the usual Honda build quality. It was supposed to be a 750 but Honda gave it a longer stroke to make 893cc.

In 1992 only Bridgestone made a tyre for the 16in front wheel and it wasn’t good enough. It took two years for tyres to catch up with the quick steering Honda, which gained a reputation for tucking under and tankslapping.

Plenty of 92 FireBlades ended up in a ditch – worth bearing in mind when you buy one now. 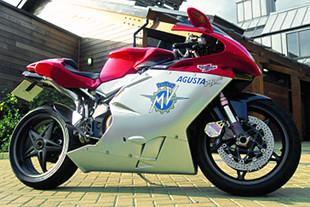 MV Agusta F4 750
Designed by Massimo Tamburini as a follow up to Ducati’s 916, the F4 was even prettier. The all-new engine was part-developed by Ferrari amid rumours of weird backwards configurations, but it ended up a conventional inline four making just 108bhp – the same as a Kawasaki ZX-7R and 20bhp less than the GSX-R750 (which also weighed 15kg less and cost half as much). Everything happened at the very top end, everywhere else it felt like a heavy 600… that was cripplingly uncomfortable. But the chassis was good, the suspension superb and the purists understood that MV’s reputation had been built on high-revving peaky motors.

UK motorcycling didn’t take to the F4 and MV didn’t help by going bust on a regular basis. When they launched the 1000cc F4, prices of the 750 dropped and are only just starting to recover.

Kawasaki ZZ-R1100
Faster than anything but too fat to race an FZR. The ZZ-R’s weapon was a ram-air system that forced air into a massive airbox and added bhp at high speed. Comfort was the selling point and post-FireBlade the ZZ-R settled into a sporting tourer role and sold steadily for another 10 years. Cheap now, but it’ll need a full overhaul. 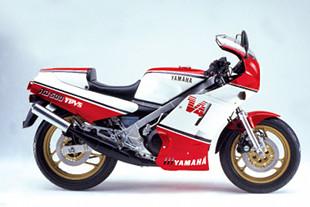 Yamaha RD500
Four exhausts, YPVS and an underslung rear shock. Just like Kenny’s? Not quite. The V4 RD500 turned out to be two 250s, geared together and only made 20bhp more than a RD350YPVS while weighing a whole lot more. Suzuki’s RG500 had more power and less weight. Prices have rallied, but many are tired.

Bimota YB4
When Bimota launched the alloy beam framed YB4 most of the Japanese were still using cradles. The YB4 used a tuned Yamaha FZ750 engine and fuel injection. It almost won the first WSB championship and the road bike was very close to the racer. Hard to find now, but not that expensive when they appear.

Harris Magnum
The Brough Superior (currently; £200,000-plus) was handbuilt from the best components to outperform everything. A Harris Magnum is the 80s equivalent… except Broughs were built in a factory, Harrises were built by you and me in a shed.  Prices are rising. 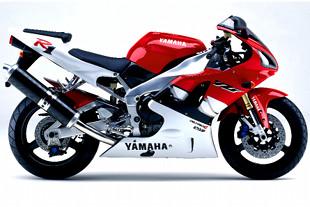 Yamaha YZF-R1
Lighter than a FireBlade, with 20bhp more. Shorter too. Oh lordy.

No one was ready for how good this was and no 1998 rubber could contain the R1. Plenty went end-over-end into the gravel traps of Britain as R1s on insufficient rubber met the track day boom of the late 1990s – that mint 98 bike you’re looking at tonight might have been one of them. The engine was conventional but the R1 had torque as well as power, which added to the lunacy.

Stacking the gearbox behind the cylinders kept the engine compact and allowed a short wheelbase with long swing-arm for added stability and quick steering. Long travel forks helped keep the front wheel on the ground under acceleration.

It’s already a classic but prices don’t reflect it yet. Everyone should try one. Once.

Suzuki Hayabusa
Mother, my hair just fell off. Hayabusa rule number one. Never ride without a helmet if you wear a toupee. This thing is fast. Very, very fast. And that’s all you need to know. When Honda launched the 175mph Blackbird with claims of 200mph, Suzuki responded with the Hayabusa and another 200mph claim. It had 30bhp more than the Honda, slippery aerodynamics and was named after a falcon that eats blackbirds. We waited at the end of a long runway in Leicestershire. It did 191mph… which was rubbish, obviously (only joking).

The heart of the Busa is its engine. Tuneable to give another 100bhp without touching the bottom end and used in everything from turbo dragsters to track day kit cars. Which keeps prices high. 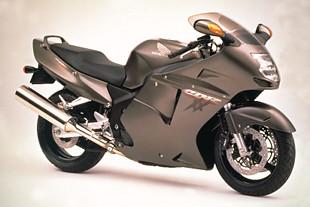 Honda Blackbird
A colleague called it ‘a VFR on steroids’ – I’ve never heard it put better. Everything great about Honda’s perfect sports tourer made greater and only slightly heavier. The Blackbird is fast, but useable… comfy, but sporty and built to last into classic status. It just lacked numbers to back the bull, which matters for a classic.

Yamaha FJ1200
Launched in 1984 as an 1100, 27 years on the engine currently powers the naked XJR1300. But it was always best in the FJ1200. Comfy, torquey, easy to ride. The FJ was the first and, some say, the best sports tourer. Simple idea, but brilliantly executed and they still have a massive following. Prices are low for such a great bike – buy now.