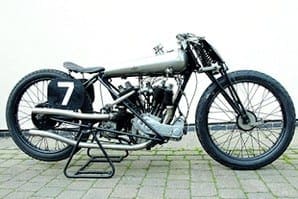 The machine in question is Old Bill, originally known as Spit & Polish (due to its immaculate appearance). The bike achieved its first victory at the Brooklands circuit, Weybridge, Surrey, but also put its rider in hospital later the same day, following a burst front tyre.

Brough rebuilt the motorcycle with special forks and a prototype JAP engine, renamed it Old Bill in memory of Bruce Bairnsfather’s First World War cartoon character, and went on to win no fewer than 51 sprints in the 1922/3 seasons.

Old Bill has had a long and varied history, including being sold to the founder of the VMCC, surviving a bath falling on it during the Second World War and being raced in the 1991 classic Isle of Man TT races – the first time a Brough had ever competed in the Island.

It has been on display at the Nottingham Industrial Museum for the last few years. For more info, go to www.handh.co.uk