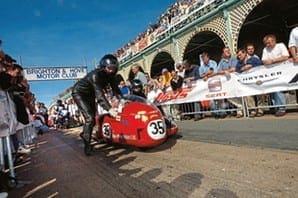 Motorcycles and cars are eligible in both road and race trim. Around 200 entries are expected on two and four wheels and there are a range of categories. The Brighton Speed Trials is a competition event so you will need a competition licence to enter. Details are on the website.

Tony Watts of the Brighton and Hove Motor Club said: “We are expecting a very busy event this year after the overwhelming support we received to save the Speed Trials after initial resistance from the council.”

After the council initially declined an application to run the event in 2014, a petition with over 12,400 names and a major press and social media campaign forced the council to re-think its decision and the Speed Trials are back on. Among the supporters were Sir Stirling Moss, Brighton-based bestselling author Peter James, Tiff Needell of Fifth Gear, Nick Mason of Pink Floyd and Top Gear’s The Stig.