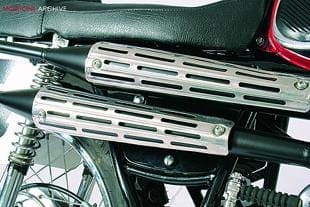 Bridgestone motorcycles were manufactured from 1958 until 1971 with a range of machines from 50cc to 350cc, all two-strokes and all based on disc valve designs. The bikes sold strongly in the US via the Rockford Company of Illinois and were serious rivals for the upcoming Yamaha and Suzuki brands. Known for their elegant design and high quality engineering, Bridgestone championed the disc valve design over the rival piston port engines of competitors (reed valves had yet to be introduced to the mass market), and pioneered aluminium barrels with chromed bores, superior in both engineering tolerances and heat dissipation.

Introduced in the US in 1965, the 175 ‘Dual Twin’ was a popular and attractive motorcycle developing 20bhp and capable of reaching 60mph from rest in 14.8 seconds. For the 1967 season Bridgestone acknowledged the growing interest in leisure off-roading, and revised the Dual Twin with high level pipes, cross braced handlebars and knobbly tyres. This was the Hurricane Scrambler, and it was an instant hit with trail riding Yanks. Inevitably, some bikes were diverted for more serious competition use and hoping to gain a little racetrack glory in which to bask, Bridgestone prepared a limited number of Hurricane Scramblers specifically for flat track racing.

Although closely based on the Hurricane, already a quite adequate performer, the 175SR varied in a number of important details. Geometry and disc valve timing was tweaked and the Hurricane was stripped to the bones, even losing its tank badges. As flat trackers (like speedway bikes) are designed to race on clockwise oval circuits the high level pipes were now stacked up on the right side. Production numbers for the 175SR are not available, but only a handful of bikes now survive and this example is rare enough to be considered unique, particularly in this condition.

By 1970 Bridgestone were suffering, like the other two-stroke manufacturers, from increasingly stringent anti pollution laws. Their motorcycle range was produced alongside the brand of tyres the company is still known for, and the pressure was on from Yamaha and Suzuki who threatened to look for alternative suppliers for their o/e tyres. Under attack from both directions and with shrinking profit margins, Bridgestone opted to abandon motorcycle production in favour of the tyre business. The 1971 motorcycle catalogue was their last. Most of the tooling was sold on to a Taiwanese company who continued to manufacture spares, and many new-old-stock Bridgestone parts now originate from Taiwan.

Background
When Cycle World tested a Hurricane 175 Scrambler in 1968 they found it a well-mannered and flexible little bike, though were bemused by the gearbox, which could be switched from four to five speed options (with a different change pattern) by flicking a lever mounted on the left side.

Criticisms were limited to underdamped suspension and excess weight. “If a reasonably crafty tuner could snip himself a wilder set of rotary valves and strip the frame of the excess weight,” they said, “he could conceivably come up with a competitive machine for TT scrambles.” The 175SR was the factory response.

Owner of our bike, Brian McDonough, has a collection of Bridgestone motorcycles, most of which have been (or are in the process of being) restored to factory condition. All the work on this bike was carried out by Brian and Vince Gunning, with rare NOS parts sourced from both the United States and Taiwan.