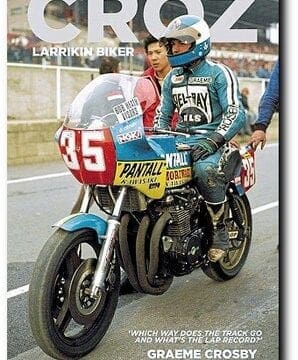 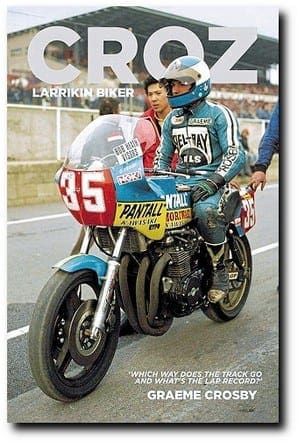 It probably says something about the cultural divide that British readers are going to be asking ‘what’s larrikin?’ long before they’ve even so much as turned a page of Graeme Crosby’s 432-page autobiography (it means mischievous or hooligan, by the way, being a slang word from Down Under).

That’s a big page count for a motorcyclist’s biography, even more impressive given the fact it’s not ghost written – there was a writer contracted, but he was told “don’t bother” after the publishers read “Croz’s” first self-penned chapters. Good thing too – there’s been no ersatz reworking, no re-ordering, no injection of historical sterility, this is story telling the way we best like it – by a mate down the local, and pretty much uncensored, as you’d expect from bar talk.

As a quick re-cap, Graeme Crosby was a top class road racer from the late 1970s into the early 1980s. New Zealand born, he cleaned up in production and superbike racing at home and Australia before coming to the UK in 1979 with a Moriwaki Kawasaki flat-barred superbike. He promptly wiped British racers off the face of their own racetracks. Ever the candid player, Croz loved to turn up at a new track and ask “Which way does the track go, and what’s the lap record?” Such was his precocious talent, he could be relied upon to rewrite that record before the day was out.

We only knew Croz for three short international seasons but in that time he took three TT wins, too many British championships, plus victories in the Suzuka 8 Hour and Daytona 200 – and ascended to vice-champion in the 500GPs. That’s nothing short of staggering. Croz’s life was indeed a whirlwind – and like many a whirlwind he was gone before we knew it. Croz retired at 28, disenchanted and disconnected with the new direction in GPs and evermore wary of the likelihood of serious injury. He’d seen too many riders, and mates, maimed or killed.

Croz’s book reflects on all of this. He’s also disarmingly honest about his contractual dealings, telling us exactly how little he was paid when he signed with Heron Suzuki (Bazza, if he was alive today, would choke on his tab), but also lets us understand the economics of those old world currencies called start and prize money. And he’s sensitive to the tragedies – his reflections on the loss of Kenny Blake in the 1981 TT are as subtly rendered as you’ll read anywhere.

Croz: Larrikin Biker is an excellent read. Note Croz also uses the word biker, not racer – you’ll find he’s one of us. CMM is about bikes from the 1970s and 80s, and this book is lively, entertaining, and is all about riding those same bikes to the limit. That’ll do for us.