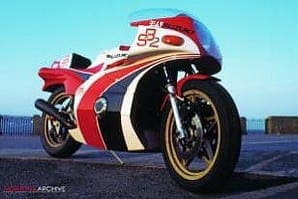 Bimota, the small Italian manufacturer that’s been through more than its share of financial problems in recent years, developed a huge reputation in the 1970s and 80s as the source of not just fine-handling exotic sporting motorcycles but of two-wheel artistic expression.

That reputation was originally built on providing frames for road racing and later road bikes powered by a variety of Japanese four-cylinder engines.

And so strong was the brand that even after it collapsed when trying to offer its own design of fuel-injected 500cc two-stroke twin, it was revived in 2003 by Roberto Comini and still makes ‘hand-crafted’ alternative sports bikes, now powered by Ducati V-twins. Older riders might cynically suggest that the factory, still at Rimini on the Adriatic coast, has been exploiting past glories. It’s a lot more difficult nowadays to improve on the offerings of the leading factories. But it was no easier three decades ago. 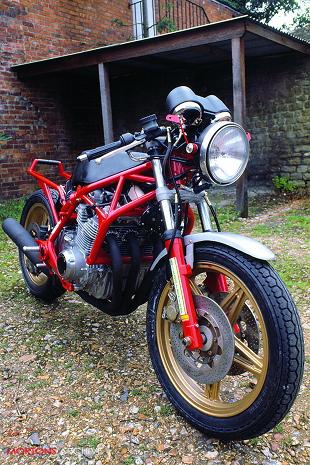 Small-scale manufacture of racing frames was more craft than science. But the craft was exquisitely executed by Bimota and by helping to win world championships proved that its engineering skills were second to none. Most memorable was the works Harley-Davidson 250cc two-stroke twin using a multi-tube space frame made in 1975 by Bimota in which the swingarm pivoted on the same axis as the drive-chain sprocket so that the action single spring-damper unit – another innovation – was less affected by the power delivery.

The designs came from the fertile mind of a young Massimo Tamburini who had set up Bimota with colleagues Valerio Bianchi and Giuseppe Morri in 1973. By 1976 he was using similar features in laying out the factory’s first production road bike.

Six months later I was riding the first SB2 to arrive in the UK on the Isle of Man TT course. It was April, just five weeks before the TT fortnight and fans were being whipped into a frenzy of anticipation that the legendary Mike Hailwood would be coming out of retirement to race a Ducati in the Formula 1 event.

The Bimota had been shipped over to the Island by the newly appointed agent David Dixon, also the importer of Yoshimura tuning kits, so that Cheshire dealer Bill Smith, who had been entered for the F1 race, could give the bike a shake down.

To provide some advance publicity I, as road tester at the weekly paper Motor Cycle, had been invited to join the fun and become the first journalist to try the SB2 in anger.

Douglas waterfront
I was introduced to the bike on the Douglas waterfront. Shallow sunlight picked out the details of the red and white fairing, the smooth red paint of the frame, the gold of the cast alloy wheels. The SB2 looked like something from another planet, ratherthan Italy.

Four rubber catches at the front of the one-piece seat-tank unit were released to expose the chassis. Its frame embraced the engine tightly, chrome-molybdenum alloy steel tubing wrapping either side. Like the Harley-Davidson racer, the rear wheel’s swingarm was longer than usual, attaching to large-diameter bearings at the full width of the fairing and with the same co-axial arrangement with the final drive sprocket. To enable the engine to be a tight fit, the frame was made in two parts, front and rear, joined by conical couplings in the upper spars.

Suspension at the rear was provided by a single Italian made Corte e Cosse spring damper unit with a linkage similar to those found on Ducatis 10 years later. Chain adjustment was by eccentric rear-wheel spindle mounts, a Bimota trademark.

Up front, a premium Ceriani telescopic fork with 35mm diameter legs was used. But the geometry was unusual in that unlike convention in which the legs are parallel to the steering head, the specially machined yokes set the legs at 60 degrees while the steering head angle was a conventional 64 degrees from the horizontal. The idea was to both stiffen the yokes and reduce trail as the fork compressed under braking. 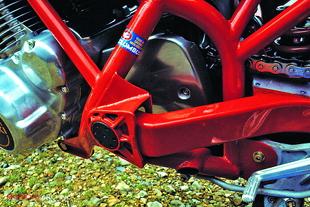 Wheels were 18in lightweight aluminium alloy units to Bimota’s own design to take what were for the time unusually wide tyres, Michelins with a 3.50 front and 130/80 rear widths. Brakes were the best you could specify at the time: Brembo perforated11in discs.

Watched by a young Ron Haslam, who was also in the Island to get road experience before his first Isle of Man TT, we quickly reassembled the bodywork and I sat astride the Bimota. It felt tiny with a short 54.5in wheelbase and 29.5in seat height and but for the enveloping fairing might have seemed even smaller.

Dixon switched on the ignition and I cracked the twistgrip. The engine barked into life through its four-into-one pipe. This was no stock GS750 engine. Dixon came clean: it was special 843cc motor with Yoshimura parts including gas-flowed porting, 4mm larger-diameter high-compression pistons, higher lift camshafts and smooth-bore 29mm Mikuni carburettors devoid of any filtration. It was snappy like a pit bull and declined to idle. Dixon said it developed peak power of 95bhp at 10,500rpm, up from 67bhp of the stock engine, and would rev to 11,000. Gearing was up one tooth on the engine sprocket, giving a theoretical 150mph top speed. Weight was 433lb dry, a huge 60lb less than the GS750.

TT Course
But if I’d expected this SB2 to be a handful I was mistaken. Nipping along the back streets of Douglas to reach the TT course the bike zipped through the gears smoothly as the howl bounced off the buildings. It was a doddle, and I daren’t reveal what the speedo showed as I crossed the roundabout at Quarter Bridge and set off for Bradden. Before I’d reached the left-right at the bridge the Suzuki motor had hit the promised 11,000 through the gears but I had to check the speed through road works. Beyond the 30mph section at Union Mills I gave the Bimota its legs and it just sang along at what seemed like a comfortable cruising gate, but what the speedo showed was well over a ton. 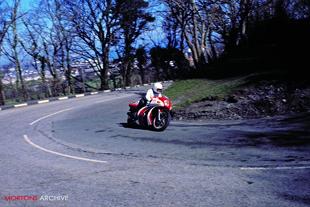 I tucked in, moulding myself into the sculpting of the bodywork. The footrests were amazingly narrow, thanks to the pinching of the swingarm and neat attachment of the foot anodized-alloy controls to spars inside the swingarms. Chinning the tank behind the fairing I still had a great view of the road as it snaked ahead. For the time, the SB2’s stability was uncanny.

At Glen Vine, the TT course was smooth and uncluttered and climbs to a crest just before The Highlander Inn. At the crest the front went light and the revs picked up more quickly, the speedo showing 120mph as I flashed past the Inn before it was necessary to knock it back for the left-right at Greeba Castle.

A more demanding test of the Bimota’s handling came beyond the blind bends at Laurel Bank and Glen Helen. While at modest speeds it’s nimble, the rear end is a little harsh, and this was borne out on the bumpy surface beyond Handley’s. But the handling was nigh spot on as I flicked the bike through the high speed bends at Bishopscourt before ambling over Ballaugh Bridge.

Quarry Bends were even more demanding. Most racing bikes wiggled their rears as the bumps were hit under full power and the Bimota did the same, but never felt anything but secure.

Climb out of Ramsay
The climb out of Ramsey is a good measure of power delivery and exiting the hairpin the Bimota’s front wheel fought back over the bumps and lifted off the deck as the engine hit what was a more obvious power band. The Mountain was taken at a comfortable 120mph and on the smooth surface the bike could be confidently pitched from apex to apex. Beyond the Bungalow, the speed never dropped below 100mph: I could see well ahead and it was safe to straighten the series of curves. Then at Keppel Gate I could see down to the Creg and nailed the bike, hitting the bump in one brief ecstatic moment at 110mph, with both wheels off the ground. 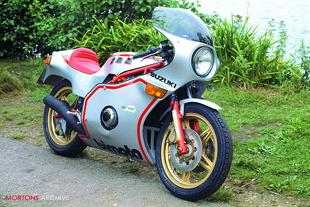 Back in Douglas, Bill Smith, who even by then could boast dozens of TT replicas, provided his own verdict on the bike. He didn’t like the rear suspension, which with his extra weight was too soft, or the riding position, which could have been improved by raising the handlebars by about two-and-a-half inches.

By the time the bike was prepared for the TT it had been fitted with a 944cc full-race engine that was timed at the MIRA proving ground at 145mph. Fujio Yoshimura, son of the fabled Pops, came over for the TT and fitted a special cam chain tensioner on the eve of the race.

Problems in practice had surfaced when it was found that the alloy fuel tank inside the bodywork wasn’t large enough to last two laps. A smaller additional tank was grafted into the seat tail and connected with an additional tap.

In the race Smith hit the bump at the bottom of Bray Hill and the bodywork’s rubber mounts let go, allowing the rear to touch the tyre and overheat the seat. But all ended when the cam chain tensioner broke, allowing the pistons to hit the valves, which as Dixon recalls, lent credence to Smith’s remark that “…it felt rough, so I pulled in…”, leaving the Glencrutchery Road obliterated in a cloud of oil smoke…

By Japanese standards, the SB2 was produced in tiny numbers. Records show that Bimota made 140, which was high by its standards. That now puts the SB2 among some of the rarest machines ever produced and, coming from the pen of a master, worthy of classic status.