Think of six cylinders and you think Honda CBX – but Benelli got there first with its 750. Later came the 900 version but Neil Murray reckons the first was the real classic.

I love the motorcycle engineering of the Seventies. The sheer diversity of engineering in that decade was incredible. Designers churned out singles, parallel twins, vee twins in-line and transverse, triples both four stroke and two stroke, transverse fours of course, flat fours, flat twins, Wankels… and sixes.

I was going to say that the six-cylinder bike was born and buried in the Seventies but I forgot about the Gold Wing. Nevertheless, the 1970s saw three manufacturers produce transverse six-cylinder bikes. Kawasaki had its monster Z1300 and Honda the utterly classic CBX, but it was Benelli that got there first with the 750 Sei.

Benelli was an odd manufacturer at the time. From being a producer of small lightweight singles and twins (barring a worthwhile foray into big twins with the 650 Tornado), it started building multi-cylinder bikes after it was acquired by Alessandro de Tomaso, who also owned Moto Guzzi.

A lot of parts – lights, switches, clocks, brakes, suspension – were common to Benellis and Guzzis in the mid-to-late Seventies.

Anyway, in 1972, when it was first announced, the 750 Sei was a revelation. Benelli had copied Honda’s 500 four engine – seriously, if you look at the two engines side-by-side it’s only things like the slightly more squared-off cylinders that give the Benelli away. Even the tappet covers look identical. 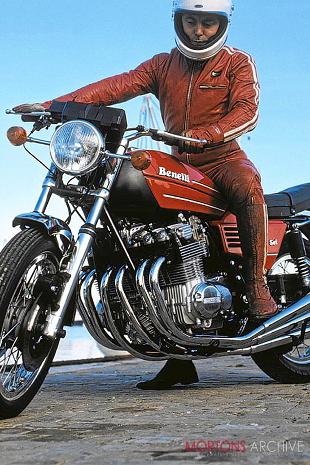 It’s been said that for the 750, they merely added another couple of cylinders to the 500, but that’s not quite fair. The Sei was much cleverer than that.

Benelli realised that simply increasing the engine that way was going to result in something unfeasibly wide. Honda and Kawasaki got round the width problem by mounting the alternator piggy-back behind the cylinders – well, Benelli chose that route several years before the CBX appeared.

Not only that, but the alternator doubled as the electric starter, rather like on some small two strokes (DT125E, RD200, GT185). The result was an engine only an inch wider than a Honda CB750 four, or, if you prefer, an inch narrower than a CBX.

The Sei also boasted a five gallon fuel tank. By rights it should have been a pudgy-looking sod, but if you look at photos (or, if you can find one, a Sei in the flesh) you’ll see that the Italian stylists did a sensational job. The bike looks neat and compact and at 485 lbs (220kg) dry it was getting on for 50 lbs lighter than the Honda CB750 too.

What clinches it for me is the exhaust system. In those days, if you had four cylinders you damn well boasted about it and gave the bike four silencers. Honda, Kawasaki, MV Agusta  – they all did it. The Sei had six cylinders, so it got six silencers, kicked up in a glorious fan, three per side. Coupled with the engine’s forward inclination that gave an impression of speed. I think it was a styling masterpiece.

The Sei wasn’t really any faster than contemporary 750s – at 118 mph or so flat out it was similar to the Suzuki GT750 or the Honda CB750F1. However, it had no fewer than four trump cards. It was incredibly, gloriously, liquid smooth. It made a sensational sound.

In the Italian tradition of the time, it completely out-handled any Japanese 750. And with a double Brembo front disc (and drum rear) it out-braked the Japanese opposition too. Dynamically, it was way, way ahead of the pack.

The trouble was that the extra horsepower (a claimed 71 bhp, though capable of a fair bit more if you junked the restrictive induction system) was a bit too much for the gearbox, which was more or less unchanged from the 500. Early examples blew their gearboxes under hard acceleration but Benelli quickly beefed up the components and by 1975 it was sorted.

The trouble was that at £1700 quid in late 1975 it cost nearly double the £979 list price for a Honda CB750, and the CB750 was (ultimately) more reliable and just as quick in a straight line. The Sei remained a piece of glorious exotica for the wealthy enthusiast, and those were not nearly as common a breed then as they are today.

The bike never made any kind of mark in racing (unlike Laverdas or Guzzis), though one was entered by Motobecane, the then French concessionaire, in the 1977 Bol’Or, boasting a special frame that used the engine as a stressed member, single-sided swinging arm and an amazing spaghetti dish of an exhaust.

So it remained a rare sight on UK roads. In 1980 it was revamped and became the 900, which was really when the rot set in. For some inexplicable reason Benelli made the engine wider by relocating the alternator from behind the block to the left-hand crankshaft end. 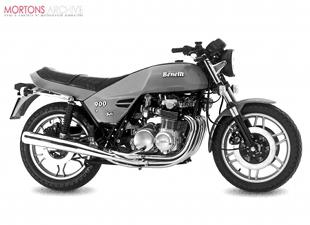 The engine wasn’t really any more powerful at a claimed 77 bhp, although it developed more torque. The retention of the tiddly 24mm carbs probably had something to do with this. When Bike tested it in September 1980 all they were able to wring out of it was a best top speed of 112 mph – poor for a 650, never mind 750, never mind 900.

When I rode one, I was amazed that something could be so uninspiring. It accelerated nicely up to 6000 rpm, on a goodly dollop of torque, and just when you were anticipating the rush to the 9000 rpm red line, it all went flat and nothing happened. It felt like a large restricted 125.

Worst of all, they cocked up the styling. Away went the glorious six-into-six exhaust to be replaced by a six-into-two, and the neat fuel tank of the 750 was replaced by a big plastic integrated tank/side panel cover that just looked drab. Oh, and if you wanted to replace the rear chain you were in for fun because it was a duplex twin-row affair.

In its favour, the brakes had been uprated with the fitment of the linked system from the Guzzi range, but then there wasn’t much wrong with the 750’s brakes to start with. There just seemed to be no point in buying a 900 Sei whatsoever, especially when the Honda CBX was around, and it just quietly faded away.

For years after Benelli vanished as a brand in the UK, you could find new 900 Seis sitting on showroom floors, forlornly awaiting buyers. Nowadays, the 900 is still in limbo, whereas the original 750 is considered a classic and quite sought after. Rightly so.

What goes wrong
The engine really isn’t as solid as an equivalent Honda, it must be said. Italy simply couldn’t build engines to the fine tolerances used by the Japanese, so when they tried copying a Japanese design you were bound to get problems.

Oil leaks and heavy oil consumption are fairly commonplace, especially on the 900. The 750’s weak gearbox has been mentioned but this had been sorted by the time the bike was sold in any volume in the UK, so the chances of getting an early weak gearbox model are remote.

The engines seem to go out of tune quite fast. The 750 had points ignition and an electronic ignition conversion is a must. Valves don’t seem to stay in clearance as long as they do on Hondas and the camchain needs regular tensioning.

The finish was lousy, as it was on most Italian bikes of the era. The electrics weren’t much better, although the problems were usually confined to the connector blocks and switchgear rather than the major things like alternators and coils. 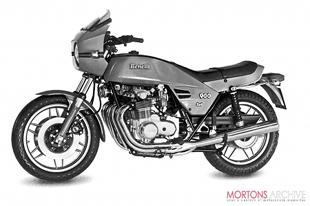 Rev counter and speedo cables can be expected to snap with monotonous regularity, fuel taps and fuel caps leak petrol (unnerving, that), and the 900’s clutch really isn’t up to the extra torque of the bigger engine.

Remember also that spare parts will not be easy to find. Brakes, clocks, switches and so on are fairly easy to source because they were all fitted to other bikes like Moto Guzzis, but things like trim, exhausts, and other stuff are a different kettle of fish. Join the owners club and be prepared to hunt – the USA is supposed to be a reasonable hunting ground.

Which to buy
Easy decision this. Buy the 750. It got there first. It is dynamically far superior to the 900. It looks unutterably gorgeous. Secondly, buy a decent one to begin with rather than a restoration job unless you enjoy the challenge of phoning California at 2am in the hope of locating an exhaust system.