For many it’s the highlight of the show weekend, but if you think you can just turn up at the Bonhams Autumn Stafford Sale this October 17-18 and expect to walk away with a bargain, think again. Buying at auction needs careful planning and consideration. After all, fail to prepare, prepare to fail. Here are some simple tips from The Classic MotorCycle editor James Robinson to help you on your way…

Auction Do’s And Don’ts
James Robinson gives auction advice to James May and Richard Hammond at the Stafford show last April
I’ve bought quite a bit at auction, for myself and on behalf of others. I’ve also bid for a lot and come away with nothing. I’ve regularly ignored my own advice and almost landed myself with something I didn’t really want, while I’ve also stood next to someone and bid on their behalf, and despite their encouragement to keep going past the price we’d agreed pre-sale, I’ve turned and walked away.

Bidding is exciting, but it’s nerve-wracking too. Having bid (and won) on a motorcycle for someone out of the country, communicating via a very dodgy mobile signal, I committed myself to a contract for significantly more than I paid for my house. One’s palms become sweaty and pulse quickened…

I’ve gone specifically to buy one bike and come away with another of the same marque/model, as the catalogue’s pictures flattered the first one but made the other look worse than it really was, while I’ve also bought a bike because it just seemed too cheap to let pass by.

I’ve also regretted having not bid on a bike that’s gone ‘cheap’, but if I’d been bidding for it, then the other person might have been prepared to go on and on too. So never walk away thinking ‘I should have had that at that price’ because, basically, you never can; if you’d have been bidding then the price would have been higher.

It’s also worth, if you can, getting a look at who you’re bidding against. If you’re up against one bloke, who’s stood with his wife and son, say, then he’s normally come specifically for that lot. Unless you’re prepared to ‘go all the way’ and beyond, you’ll never win. However, if you are up against a dealer and you’re prepared to pay market value (even if it is beyond what you think) you’ll always succeed as a dealer needs to sell on whatever he buys for a profit. And as (very roughly) most dealers look to make £1000 out of every bike, then you have that ‘in hand.’
Do…

Have a price, and stick to it
Always register, you never know
Check the documents/anything else with the lot
Speak to someone about ‘your’ lot
Try and view the day before 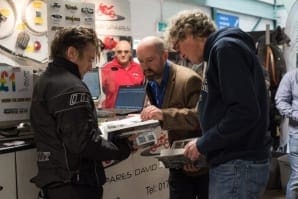