We rebooted the KR250 into a KR500 and realised we’d actually completed the set of 500s from the big four Japanese marques. So it was only natural that we brought them altogether, remixed for your pleasure in one big smoky burnout.

They make your clothes smell, blow up regularly, sound like toys, cost a small fortune to run, are difficult to ride with their wafer-thin powerbands and… we absolutely love them.

Big stroker sportsbikes are even more desirable now than they were back in the early 1980s when all the main manufacturers were building them. If you don’t believe us, go check the used prices. GP bikes were all strokers back then during the ‘golden age’ of bike racing with the likes of Sheene, Roberts and Spencer showing us how to hustle a 150bhp around a racetrack in a hurry.

The technology trickled down to the road bikes too and by the mid-80s we’d hit the peak of big two-stroke development. But the writing was on the wall for our smoky, polluting steeds – you only need to look at the typical size of silencers on a modern day four-stroke to see what they were up against.

With just half the number of piston strokes to suck, squeeze, bang, then blow with ever-tightening emissions, the last fast road-going two-stroke sportsbikes to roll off the production line (if you discount the barely-working fuel-injected 1997 Bimota V-Due) were the Suzuki RG500 and Honda NS400R in 1987… 29 years ago. When you think of how popular these machines still are, the prices they command and the interest in any two-stroke ‘new’ machine such as the Suter MMX500, it’s little wonder that in our fantasy world, the main Japanese firms still build them.

In the rush to build the first large capacity race-rep stroker, Yamaha pipped Suzuki to the finish line by a whole year with the RD and although a little rough around the edges it was an instant success. A water-cooled V4 motor punting out a claimed 88bhp, living in a steel box-section frame and suspended at the back with a shock mounted horizontally under the motor, it was full of fancy tech but possibly best of all, the styling was absolutely bang-on the money. It didn’t matter that it made less than half the power of King Kenny’s racer, it looked the part and it had FOUR crackling pipes chugging out smoke behind it.

Our 2016 reboot makes an easy 135bhp and 65lb-ft of torque, has a lightweight frame made up of R1 and YZR bits (in alloy like the higher-sec Japanese-only original) ditches the fat 16in front wheel for a 17-incher, and features extra vents in the bodywork to keep the V4 cooler. While it might make similar power to a GSX-R750, it weighs a good 45kg less and the way it makes it will have you grinning long after the power valves have shut down. 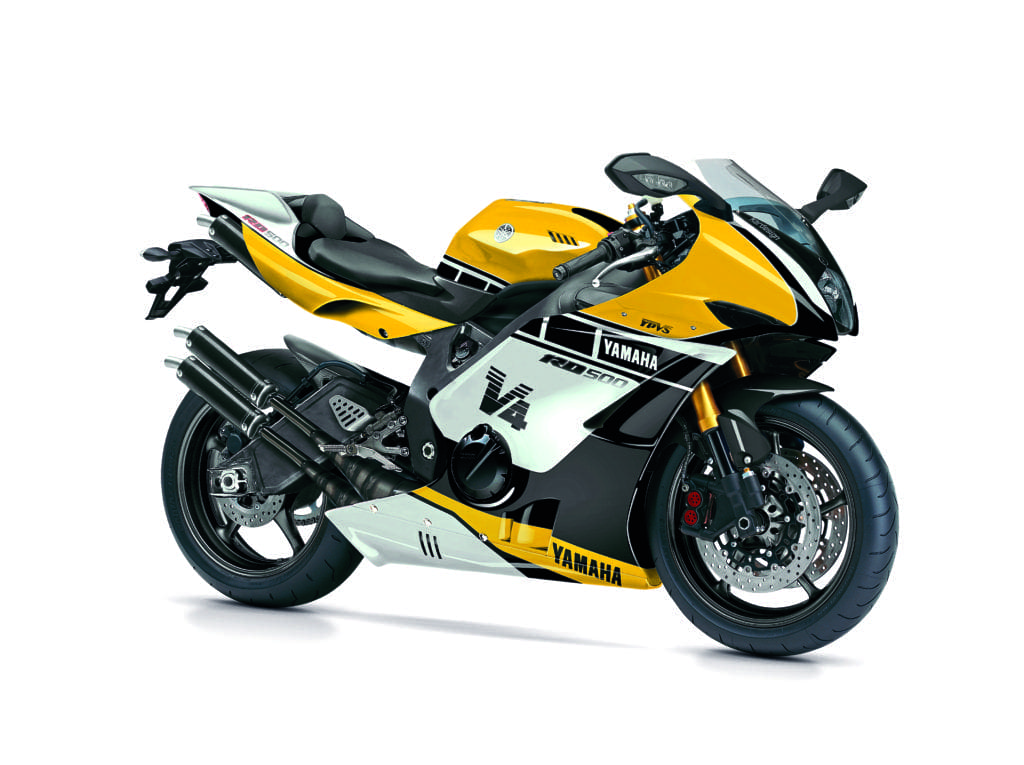 Straddling the ground between the 250s and flagship 500s, Honda was late to the party or opted out of the big stroker scrap depending on your perspective, with the NS400R. Some people were unsure about the lack of power from the 387cc V3 motor compared with the 500s, but where the NS shone was in the handling. Our big-bore NS finally becomes a 500 and as some sort of engine-related power-boosting device is compulsory in this market we’ve kept the ATAC (Automatic Torque Amplification Chamber) acronym.

The original 72bhp motor might still be a V3, but with 21st century technology and a healthy capacity hike we’d expect a reliable, usable 130bhp at least. In a package that weighs just 140kg dry, this is one Honda you can never accuse of being boring. The frame is a heavily modified alloy beam with a single-sided swingarm and upside-down Showa forks. Handling and power in a single HRC package. 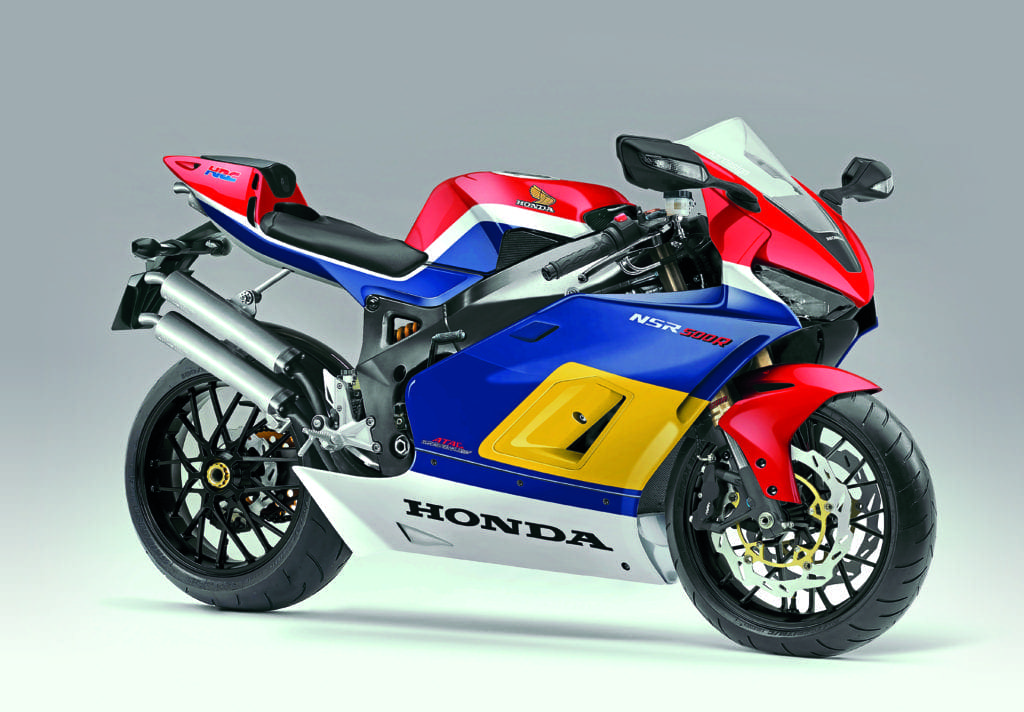 If the RD500 was the first, it was the sensible one. It had midrange thanks to the miracles of YPVS and a longer wheelbase compared to Suzuki’s offering. The square four RG500 had the advantage of an extra year of development and made the most of it with more power (95bhp) mostly delivered in a 2000rpm-wide slice. It separated the boys from the men. With similar styling to the RD, the RG just seemed more polished everywhere. A 17in rear wheel was ahead of its time, the calipers had double the number of pistons and it was acknowledged by many to be the more angry of the two.

Fast forward to Retro Reboot land and we think the modern day version could look like this. Instead of the square four powerplant we’ve opted for two RGV250 motors bored out to 300cc and fused together as one resulting in an RGV600. 155bhp is within spitting distance. Forks and brakes are donations from the GSX-R750 while the swingarm is all-new to handle the power. 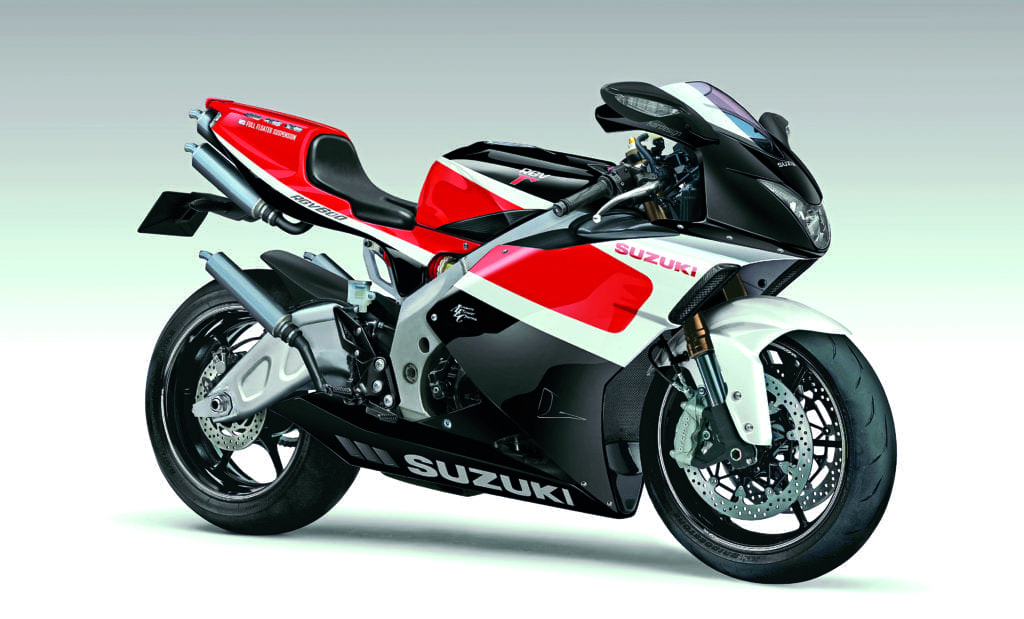 Kawasaki’s biggest race-rep stroker never got past the 250cc marker which was a real shame as the parallel twin KR1-S turned out to be a wonderful machine, the predecessor of which was the tandem twin KR250. With a stacked cylinder arrangement, we think the KR would work well as a 500 – so here it is: our square four stinkwheel.

Held together with a monocoque chassis (as in the ZX-12R) our KR500 features fuel-injection, disc-valve induction, ram-air and fuel modes as well as traction and launch control. With 145bhp to match the 145kg weight, Big Piston forks from the ZX-10R and a Kork Ballington history, this is one green machine we’d love to swing a leg over.